No place for US ambiguity on Honduras coup 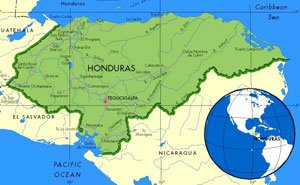 AS the protests have mounted against the June 28 military coup that deposed the elected president of Honduras, Manuel Zelaya, the role of the US in supporting the coup leaders has become increasingly exposed.
The coup “government” has been rejected by every Latin American government, the Organisation of American States (OAS), UN and EU, and while the Obama administration has refused to acknowledge the coup regime, the State Department has also failed to classify the violent military takeover as a “coup” - which would mean the US government would be forced to cut off all aid to the regime and suspend all diplomatic relations.
In a pointed reference to the US government, Venezuelan President Hugo Chavez said it was time to expose those who publicly condemned the coup but “applauded under the table, as has happened so many times before”.
President Zelaya attempted to return to Honduras on Sunday 5 July, accompanied by the Secretary General of the UN General Assembly Miguel D’Escoto and Honduran Foreign Minister Patricia Rodas, but the military blocked the plane from using any of the country’s airport runways.
Presidents Cristina Fernandez of Argentina, Rafael Correa of Ecuador and Fernando Lugo of Paraguay, and OAS Secretary General Jose Miguel Insulza, were also denied the right to land in Honduras by the military regime.
Tens of thousands of Zelaya’s supporters gathered outside the airport awaiting the president’s return – but the protest was violently repressed by the military, who killed two people and injured many more. Ongoing street protests are being attacked, gassed and beaten by the military, a 6pm-6am curfew has been imposed and constitutional and civil rights “suspended” .

Conditional return?
On Tuesday 7 July, President Zelaya met with US Secretary of State Hillary Clinton, who later announced that Zelaya and Roberto Micheletti had both agreed to accept Costa Rican President Oscar Arias as an “international mediator”.
Media sources quoted an anonymous State Department official as suggesting a “compromise” could be reached whereby the democratically elected president may be “allowed” to return to his country and serve the remainder of his term in office – six months – in return for shelving the plan to convene a Constituent Assembly.
President Zelaya was kidnapped by the Honduran military and exiled to Costa Rica on June 28, the day a non-binding consultative poll was scheduled to take place, asking citizens if they wanted to hold a future referendum on convening a Constituent Assembly to recommend changes to the country’s constitution. The current constitution dates from 1982, when it was imposed under the US-backed regime at the height of the Reagan administration’s vicious counter-insurgency policies throughout Latin America.
The corporate media has parroted the claim by the coup-plotters that the poll was a power grab that would have allowed Zelaya to seek re-election.
But the possibility of a president serving a second term could only emerge in a new constitution – if such an option was even included in the document, which would be written with popular participation and put to a national poll  – that would likely take several years to be drafted and would not come into place until after Zelaya left office in January.
The actual question Hondurans were going to be asked in the poll on the day of the coup was: “Do you agree that, during the general elections of November 2009 there should be a fourth ballot to decide whether to hold a Constituent National Assembly that will approve a new political constitution?”

Constitutional change
Writing in the Guardian on 7 July, Latin American-based political analyst Benjamin Dangl said: “Given that it was the call for the constituent assembly that led to the coup, it appears that the coup leaders are more worried about an assembly in which the people could re-write their own constitution, than Zelaya himself. Clearly it’s the Honduran oligarchs, rather than Zelaya, who are more interested in concentrating and conserving their own power.”
Venezuela, Bolivia and Ecuador have over the past decade convened Constituent Assemblies to re-draft their constitutions to enshrine human and social rights, empower Indigenous peoples, the poor and marginalised, and to increase public control over the states’ resources.
While coming to power on a relatively conservative platform for the centre-right Liberal Party in January 200 and initially pursuing neoliberal policies, Zelaya has since then followed an interesting trajectory of progressively moving left. He has increased the minimum wage by more than 50 per cent – tackling Honduras’s sweatshop mafia – improved workers’ rights, renationalised important energy plants and taken measures to improve health care and education for the poor majority.
Needless to say, even these basic reforms have been vigorously opposed by the country’s corrupt elite, long used to controlling the military, Supreme Court, Congress and the presidency.
Honduras under Zelaya’s leadership also joined ALBA – the Bolivarian Alliance for the Peoples of Our Americas – a bloc of nine countries, led by Venezuela and Cuba, set up to counter the Free Trade Area of the Americas. ALBA aims to promote an alternative development model in the region, based on co-operation instead of exploitation, economic and social justice, fair trade and participatory democracy.
The Zelaya government’s proposal to draft a new constitution was the straw that broke the oligarchy’s back, in that it would give a sound legislative basis to a growing people’s power movement for an alternative model of development to the US-pushed free trade model, inspired by the continental shift to the left.

US role
The Venezuelan government has rightly said the attack on Zelaya must be viewed as an attack on the progressive movements and advances made across Latin America  – and in particular as an attack on the growing strength of ALBA.
The Obama administration’s public condemnation of the coup after June 28 was a welcome change from the response of the Bush regime’s enthusiastic endorsement of the short-lived, failed coup against Venezuela’s President Chavez in April 2002 – but the administration’s actions tell another story.
US officials admit to knowing about the coup plans in advance, but say they encouraged the plotters to pursue an alternative solution to the “problem”. US-Venezuelan investigative journalist and human rights lawyer Eva Golinger, who has documented the US knowledge of and involvement in the Honduran coup, wrote: “Sub-secretary of State Thomas Shannon was in Honduras the week before the coup, apparently trying to broker some kind of deal with the coup planners to find another ‘solution’ to the ‘problem’.”
Following her meeting with Zelaya on July 7, Clinton still refused to say whether or not the US Government was legally considering the events in Honduras as a “coup d’etat”, saying that since “negotiations” would soon be underway she would rather not say more on the topic.
The State Department has said it will not be suspending any aid earmarked for “democracy promotion”, including the $49 million being pumped in through USAID this year. The organisations that have received this aid are directly linked to the coup.
Incredibly, a group of representatives from the coup regime were allowed into the US by the State Department and arrived in Washington on Tuesday on the invitation of the International Republican Institute (IRI), headed by Senator John McCain.
Golinger writes that IRI can be linked to providing substantial funding for destabilisation measures. “IRI will support initiatives to implement [political] positions into the 2009 campaigns. IRI will place special emphasis on Honduras, which has scheduled presidential and parliamentary elections in November 2009,” IRI documents say.
The Venzuelan government has called on the US to clarify its position on the coup.
“There must be a categorical pronouncement and concrete actions by Obama in rejection of this coup d’etat because it is clear this coup is being supported by the military establishment of the United States,”  PSUV spokesperson Rodríguez Chacín said.
An Phoblacht
44 Parnell Sq.
Dublin 1
Ireland