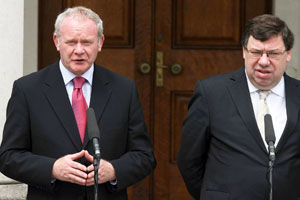 THE economic crisis topped the agenda at the all-Ireland Ministerial Council meeting in Dublin on Monday.
Taoiseach Brian Cowen hosted the meeting at Farmleigh House in the Phoenix Park along with ten Government ministers from the 26 Counties.
The North’s joint First Ministers, Martin McGuinness of Sinn Féin and Peter Robinson of the DUP, attended with eight ministers from the Northern Executive also present.
Speaking after the meeting, Martin McGuinness said that a close working relationship between ministers, North and South, is the best way to underpin the response to the global economic downturn.
“The dominant issue at the meeting of ministers representing people from across this island was the current economic climate and what we can collectively do as ministers, North and South, to meet the challenges of the economic downturn head-on,” Martin McGuinness said.
“A close working relationship between ministers across all of the areas of co-operation on issues such as tourism, agriculture, use of land assets, the North-West, planning and economic development is the best way to underpin the response to the global economic downturn.
“I welcome the commitment of the Irish Government to the road-building programme with the announcement of a £9 million downpayment on the £600 million planned investment in the North and that work will proceed on the A5 and A8 programmes.”
Martin McGuinness said that both Finance Ministers will now meet to discuss the implications of the establishment of NAMA, the 26-County Asset Management Agency, and the disposal some of its considerable assets in the North would have on the local economy. The reality is that the Irish Government owns substantial assets right across the North, he pointed out.
“All-Ireland co-operation is vital in the time ahead to ensure that we can collectively emerge from the present economic climate securely and for the benefit of all of our citizens.