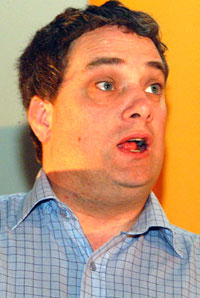 SINN FÉIN Justice  Spokesperson  Aengus  Ó  Snodaigh TD has called on the Government  to respond to the killing of Wayne Doherty in the Hartstown area of Dublin  last Saturday  by  lifting  the  bans  on  Garda  recruitment, promotion and  overtime  and  by making appropriate training and technologies available  to the Gardaí.
Wayne Doherty was shot outside his parents’ home in Hartstown last Saturday night. Gardaí say it appears that a group had arrived at Oakview Way to attack another person who lived on the road but shot Doherty when he confronted them. The 32-year-old married father of two died in hospital.
Aengus Ó  Snodaigh  condemned  the  killing  and extended sympathies to his family friends and neighbours.
“The  government  must  respond  to  this latest murder by lifting Garda recruitment,  promotion  and  overtime  bans and by correctly resourcing Gardaí   by  making  appropriate  training  and  technologies  available including secure digital radio and surveillance equipment”, the Dublin South central TD said.
“It is essential that communities assist Gardaí in their efforts and are properly protected when doing so.  All of this is imperative if we are to effectively face-down gangland crime”, he added.
Meanwhile, Ó Snodaigh has called for the Dáil to  sit  next  week  in  order to better scrutinise the Criminal Justice Amendment  Bill.

LITTLE TIME FOR SCRUTINY
Speaking on Tuesday he said:
“The Minister for Justice is seeking to rush this  Bill,  with  all  its  fundamental  changes to our Justice system, through  the  Dáil  in  just  one  week,  leaving  very  little time for scrutiny,  debate  and  amendments.   If  the  Bill  is  passed  it will undoubtedly  result in lengthy constitutional challenges at massive cost to the state.
“Rather than rushing the Bill through before the summer recess this week the Dáil should reconvene next week in order to give greater scrutiny to the  Bill  and  to  have  a lengthier debate in its implications for our society.
“I  have  tabled a number of amendments to the Bill which I will push to have  included  today.   My  amendments  include the removal of the most odious  parts  of  the  Bill such as non-jury trials and reliance on the word of gardaí and Garda hearsay.
“However, with  such  little  time  to  discuss  each of the amendments tabled, I fear the Minister will simply force the Bill through as it is. This  would  be  a  huge  mistake and I would urge him to reconsider his whole approach to this Bill.”