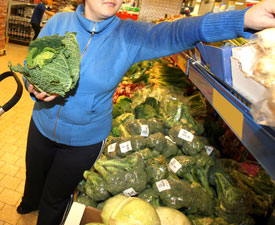 NEED TO CREATE EMPLOYMENT: The agri-food sector is one of the potential growth sectors in the economy

LOUTH Sinn Féin TD Arthur Morgan has been appointed by an Oireachtas committee to compile a report on the agri-food sector – one the key potential growth sector in the economy.
The Oireachtas Committee on Enterprise, Trade and Employment last week agreed to Arthur’s request to head an investigation under the title What is required to expand employment in the agri-food sector.
So why did Arthur ask to take on this task?
“I proposed to the Committee that I would undertake this report because the government is doing little or nothing in terms of job creation. For all their waffling about the need to create employment,” the straight-talking TD says.
“ As unemployment hits record levels it’s crucial that the Enterprise, Trade and Employment Committee plays its part in bringing forward concrete proposals regarding the steps that need to be taken to create new jobs. It’s time to move beyond generalised proposals in relation to job creation.”
TDs and senators from all parties need to be looking at a number of key sectors in detail and bringing forward strategies to create jobs in these sectors, the Sinn Féin TD argues, not just leaving it up Fianna Fáil and the Green Party.
“The Government is failing badly in this regard. They’ve been concentrating on the banks and cutting back on public services. I believe that the real key lies in the opposite direction. It’s about creating employment, giving people jobs, and getting Ireland back to work – and there is huge potential in agri-foods.”
Coming from a family with a deep background in fishing enterprise, Arthur Morgan says that the farming and fishing sectors in Ireland have been grossly underdeveloped.
“The economy was not based on a solid foundation.  The Government down the years has been focused on trying to attract foreign direct investors into the state and relying largely on that sector for job creation.  That was a wrong direction, as has been proven now as we see that sector moving to places like the Middle and Far East for cheap employment purposes
“If the Government had relied more on indigenous industry then obviously we would now have a much better economic base and we wouldn’t be in the economically disastrous zone we’re in currently.”
Arthur Morgan believes passionately that the agri-food sector is one of the potential growth sectors in the economy.
“It is clear that, with the right interventions and support, jobs can be created in this sector. Expanding this sector of the economy will also ensure that there is a market for the produce of our farmers and fishermen.”
And processing food here rather than exporting raw materials will also add more value to our economy.
“We need to be exploiting our clean, green image and developing new products for a changing market,” the Louth TD argues keenly.
“We need to be introducing more research and development and using new technologies to enable this sector to expand.”
Sinn Féin has already overseen the production of two substantial reports addressing problems in the fishing and farming sector and economic inequality, Arthur Morgan points out and he wants to build on that grassroots, community-based research to inform future government policy.
North Kerry TD Martin Ferris produced a report on the fishing sector: Ensuring the future viability of fishing and farming in the West; Donegal Senator Pearse Doherty compiled Addressing social and economic inequality in the West.
“Both those reports conducted by Martin and Pearse are excellent,” Arthur Morgan argues forcefully. And it’s not just an opinion held by a Sinn Féin colleague.
“When reports are brought back to the Oireachtas they are either cleared, amended or rejected – both those documents were cleared, which shows the standard involved. Those reports were the outcomes of wide consultation with individuals and representative of various sectors located in the West of Ireland. The report I’m doing is about looking at a key area of opportunity for job creation across the whole 26-county state.”
There are different areas of opportunity like IT, the pharmaceutical industry, tourism and of course agri-foods themselves, Arthur  insists.
“And in the latter sector there’s the opportunity to value add. For instance, I’d be looking into ways in which ports like Killybegs could set up fish-processing facilities, which of course would bring employment. As things stand, foreign vessels would come into ports like that and, in order to reduce fuel costs, they will unload the catch in the port and have it hauled back to countries like France by truck. I’ll be meeting with people from the fishing sector to see what exactly would be required in order to establish fish-processing facilities locally. This is something I am particularly interested in, not least because of my own background in running a family enterprise in the fishing industry.”
The Morgan family started a small family business selling fish to the hospitality industry, hospitals, shops and markets.
“Originally only three brothers in the family ran it and now it employs 34 people so it shows what can be done,” Arthur says with the voice of experience.
He’ll be consulting widely and take submissions from a whole range of people  involved in the sector over the summer.
“I hope to meet with many people directly in the agriculture and fishing sectors – the men and women who work in these areas and representatives of organisations like the Irish Farmers’ Association and other interested groups and report to the Enterprise and Employment Committee in the autumn.
“Reports like the two done by my party colleagues, Pearse and Martin, and the one I’m undertaking now can help galvanise support from the relevant sectors, enabling everyone to push for action from the Government.
“I don’t want to do this job because I like reports. Reports are only any good if they lead to action and we need action for jobs.”