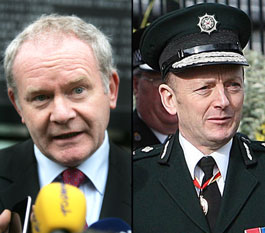 THE North’s joint First Minister and Sinn Féin MP for Mid-Ulster Martin McGuinness has called on PSNI Chief Hugh Orde to end his policy of cover-up and concealment and release files on a number of controversial killings in order to allow inquests to proceed.
Speaking on Wednesday McGuinness said: “In the course of recent years Hugh Orde has adopted a policy of concealment and cover-up with regard to co-operating with Inquests into the controversial killings of a number of nationalists and republicans. Some of these people were killed directly by British State forces others by their surrogates in the loyalist gangs.
“Hugh Orde is deliberately and quite consciously denying these families their right to the truth by continuing to withhold files and preventing Inquests proceeding in an open and transparent manner.
“This is unacceptable. Sinn Féin have raised this issue both with Mr Orde and the British Government. Quite simply this policy has to change. Sinn Féin will continue to support these families in their search for the truth. But people should be under no illusion where the problem lies. It lies directly with Hugh Orde, he has the power to release these files and finally fulfil his obligations to the Inquest process.”