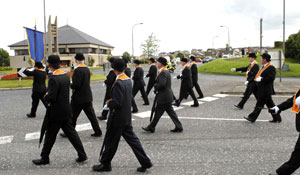 THE Garvaghy Road Residents’ Coalition (GRRC) has called on the Portadown Orange Lodge to accept the rerouting of their annual parade to Drumcree away from the nationalist Garvaghy Road as “a perfectly good alternative”.
The annual Orange march passed off peacefully last Sunday, 5 July as Orangemen were once again stopped from marching through the nationalist district.
GRRC spokesperson Joe Duffy said there is no prospect of a return parade along the Garvaghy Road.
“It’s a dead duck,” says Duffy.
Coalition chair Breandán Mac Cionnaith called on the Orange Order to “get real in this situation. The people of Garvaghy Road simply don’t want the parade and it’s high time the Order accepted the rerouting alternative.”
There are currently more than 3,000 loyal order parades in the North every year. The vast majority are not contested by nationalists. A handful of contentious parades, where Orangemen insist on marching through a nationalist area, are challenged.
None of these marches is banned. Some are rerouted away from areas where they are not wanted, often away from areas formerly subjected to gross sectarian hostility and violence against the local nationalist community. It’s a compromise but one which a few Orange lodges, including Portadown, have yet to accept as reasonable.
The Drumcree parade has been rerouted away from the Garvaghy Road for the last 11 years. The decision to reroute the parade followed years of unspeakable intimidation and violence meted out by Orangemen and their supporters against nationalist families living along the Garvaghy Road and throughout the Six Counties.