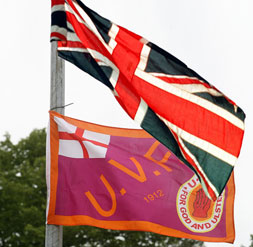 LOYALIST flags and bunting are nothing new. During the Orange marching season, streets in loyalist areas are often festooned with Union flags, loyal order flags and loyalist paramilitary flags as well as the ubiquitous red, white and blue bunting.
But this year we have witnessed what joint First Minister Martin McGuinness has comically referred to as an outbreak of “flag flu”. It is an outbreak which has not only seen the usual cacophony of flags in unionist areas in the run up to ‘The Twelfth’ but also the erection of flags in mixed areas and attempts to put up flags in predominantly nationalist areas.
But what unionists routinely describe as an expression of their cultural identity and exercise of their democratic right to celebrate that identity has a long and well-documented history as a mechanism of intimidation, intimidation that has often acted as a prelude to violence.

NORTH BELFAST
In north Belfast, the erection of loyalist paramilitary flags near mixed areas was accompanied by attacks on Catholic homes and the daubing of threatening sectarian graffiti warning Catholics residents to stay out of council-run parks.
In the early hours of Saturday morning, a mob of around 15 loyalists from Tiger’s Bay rampaged through nationalist Alliance Avenue, smashing car windscreens and wing mirrors, and jumping on the bonnets of cars parked outside the homes of local residents. They then smashed the front windows of a house in Newington Avenue before fleeing back to Tiger’s Bay.
A spokesperson for the local residents’ group, Kevin Murphy, said people living there were worried that the attack on their property was a prelude to something worse.
“This week is the mini-Twelfth and then we have the main Twelfth parades and residents are nervous about what could happen next. Could someone be attacked? Could someone be killed? There’s a sense of fear.”
Sectarian graffiti daubed on the walls of a north Belfast park announced “ATAT” (All Taigs Are Targets) and “Warning all Taigs, use your own park”. The playing fields are located between the largely unionist Shore Road area and the Antrim Road which is predominantly nationalist. The park is used by both communities.

GLENGORMLEY
In the centre of Glengormley, an Orange arch is festooned by Union flags. Last week, up to 300 loyalist band supporters converged in Glengormley for the opening of the Ornage arch and hurled sectarian abuse at children and young people playing football on a green in the predominantly nationalist Church Road area.
Within the last two weeks, hundreds of flags have been placed in predominantly nationalist areas in south Belfast. The Ormeau Road and Finaghy crossroads areas have been overwhelmed with loyalist flags.
A spokesperson for the area, Vincent Parker, said the majority of residents in Finaghy don’t want flags erected.
“Local business owners on the Lisburn Road have also said the flags have a negative impact on their summer trade.”

BALLYMENA
Shots were fired into a house in Ballymena after residents confronted loyalists erecting flags in a mixed housing estate in the Tullygarley area of the town.
Up to three shots were fired through the living-room window of a Protestant couple’s home. No one was injured.
The shooting followed an approach by the woman to people putting up Apprentice Boys flags and asked if they had sought the residents’ permission and informed them they were in breach of an agreement concerning the flying of flags in Rossdale.
A local DUP councillor, John Carson, confirmed an agreement had been brokered in which unionist flags could be flown on the main thoroughfare but not in the residential area. “Last year there was a deal brokered and it still stands,” said Carson.

INCREASES
Across the Six Counties, nationalist and mixed residential areas have reported not only unprecedented increases in the number of unionist flags being erected but also the targeting of mixed and nationalist areas where none or very few have been erected before.
Last week, in Coleraine, there were disturbances after loyalists returned to the scene of the brutal sectarian murder of Catholic father Kevin McDaid and attempted to erect paramilitary flags close to where he died and his grieving family live.
Northern nationalists don’t object to unionist flags simply because they are a cultural expression of ‘Britishness’ but because of their long association with anti-Irish and anti-Catholic hostility and violence.
Speaking at a graduation ceremony last week, Sinn Féin President Gerry Adams described racism and sectarianism as “two sides of the same coin” and urged “all of us in political and community leadership to stand up against the racists and the bigots who are trying to stir up racist and sectarian conflict”.