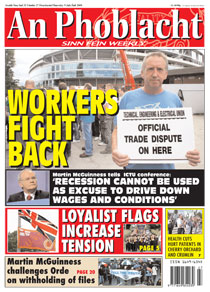 Unions to resist attempts to drive down wages and conditions

TEN THOUSAND electricians in the 26 Counties have been picketing over 200 locations since Monday as part of strike action in an effort to secure 11% pay increases owed to them since 2006. Electrical contractors are looking for a 10% pay cut. As An Phoblacht goes to print both sides in the dispute are in talks at the Labour Relations Commission.
The reason why this dispute has taken on such importance for the trade union movement is that it represents another step in a concerted attempt by employers to dismantle agreed structures and mechanism for setting wages in specific  sectors of the economy.  It follows an attempt last year by the Irish Hotels Federation to challenge the right of Joint Labour Committees and the Labour Court to set minimum wages and the employment conditions for workers in the hotel sector.
This dispute arose as a consequence of a challenge by the a section of employers to a registered employment agreement (REA) on electricians pay, agreed by workers and employers.  That employers’ action in refusing to pay the agreed increase would, if carried out by unions,  have been described as ‘wild cat action’ with serious consequences for any unions involved.  The action by the TEEU is a direct response to employers’ refusal to negotiate, despite a recommendation from the Labour Court that they should do so.
Speaking on 5 July SIPTU General President Jack O’Connor set out why the  action by the TEEU is of central concern to all workers and trade unionists.  O’Connor said “Employers’ objective of cutting pay and tearing up agreements reflects the primary aim of the wealthy elite in our society, which is, above all else, to preserve their own assets and privileged position. Their shallow analysis of the crisis therefore sees attacks on workers’ living standards as the best way of repairing the damage done to our economy by the array of speculators, developers and their cronies.”
Sinn Féin Dáil leader Caoimhghín Ó Caoláin called on the two employers’ bodies  – the Electrical Contractors’ Association and the Association of Electrical Contractors Ireland – to pay the increase in wages owed to electricians agreed in April 2008. He said only when the terms of the existing agreement have been delivered can the employers’ bodies expect the workers’ representatives to negotiate new pay arrangements.
The Irish Congress of Trade Unions (ICTU) has cleared the way for unions representing employees working alongside electricians to ballot for an all-out strike.
ICTU General Secretary David Begg sharply criticised comments on the strike by former Progressive Democrats TD and now Construction Industry Federation boss Tom Parlon that “we cannot let the lunatics be in charge”.

PICKETS
Pickets have been placed on sites where contractors are being used and many high-profile sites are affected, including the new terminal at Dublin Airport and the new Lansdowne Road stadium. It is believed that contractors may serve protective notice on electricians who take part in the dispute.
Around 200 electricians placed a picket on the Shell worksite in Bellinaboy in County Mayo and many truck drivers and other workers refused to cross the picket line.
Eamon Devoy, General Secretary of the TEEU (Techical, Electrical and Engineering Union), which represents many of the strikers, said that the dispute is not about a ‘pay claim’ but about the payment of increases which have been due for a number of years.
The union is campaigning for the hourly rate of pay of €21.49 to be increased to €23.98 although many of the electricians are not receiving the standard industry rates with many only receiving slightly more than the minimum wage.
Almost half of the electricians are employed by the Electrical Contractors’ Association (ECA) who claim they cannot afford to pay for the increases and are now seeking a 10% reduction in the pay of the electricians.
Last-minute talks to avert the strike broke down in the Labour Relations Commission last weekend.
Jack O’Connor, General President of SIPTU, said he supported the “entirely justified actions” of the electricians and said he would give a strong recommendation to its members to support an all-out picket.
Builders’ trade unions BATU and UCATT have also indicated that they will support the electricians’ strike.
The TEEU’s Eamon Devoy said that people are now realising that if the electrical contractors can get away with tearing up the Registered Employment Agreement for this sector the same can happen in other industries which will leave hundreds of thousands of workers being affected if employers succeed in this dispute.
The TEEU maintains that if this happens workers will see pay rates cut, as well as sick leave, pensions, holidays, training and other benefits being reduced.

EMPLOYERS UNREALISTIC
Speaking on Tuesday as electricians escalated their strike action, Sinn Féin Dáil leader Caoimhghín Ó Caoláin said:
“It is completely unrealistic of the employers’ group to expect the electricians to accept a 10% pay cut when they themselves have refused to pay the increase in wages that was agreed last year.
“How can the employers’ group expect the workers representatives to deliver in the future when they themselves have refused to live up to their commitments thus far?
“Only when the terms of the existing agreement have been met can the employers’ body realistically expect the workers representatives to negotiate new pay arrangements that cater for the current economic situation.
“We all recognise that we are living in a different economic reality than when this agreement was made. However, the employers’ group would have been paid for the work done by the electricians and they have failed to honour the agreement to pay the increase to the workers. They must not be allowed to use the economic recession as an excuse to line their own pockets with previously-earned money that rightly belongs in the pockets of the electricians.
“The electricians have done what was asked of them and as such they should receive what is owing to them. There is now a need for dialogue and I urge both sides to engage in negotiations to find an outcome that is acceptable for everyone.”

Joint First Minister in the North, Sinn Féin’s Martin McGuinness addressed this week’s ICTU biennial conference in Tralee.
McGuiness told delegates that his concern about the economic downturn was the effects it has inflicted on the lives of ordinary people throughout Ireland:
“Effects which you as trade unionists, and myself as a political representative, are all too painfully aware. The recession cannot, and must not, be used as an excuse to drive down terms and conditions of employment for ordinary workers.  Ordinary workers cannot be asked to pay the heaviest price for a crisis that is not of their making.
“It is their lives and futures and indeed that of their children and grandchildren that we must focus on improving.  And while we work to address the employment and banking crisis we must ensure that the most vulnerable in our society continue to be protected”.
McGuinness said this was a time of “great concern for your members, many of whom have lost their jobs or seen their incomes fall over the last year”. However, he pointed out that “with the right steps, including continued all-Ireland co-operation, we can start to get the economy back on track and promote sustainable economic growth in the longer term as we eventually emerge from the current downturn.  The trade union movement has a key role to play in building that better future”.