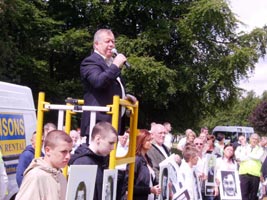 UPWARDS of 2,000 Irish republicans and supporters marched through the centre of Glasgow in commemoration of the Hunger Strikers on Saturday 13 June.
The march, organised by the Garngad Republicans, saw four republican flute bands take part: the Volunteer Seán McIlvenna RFB, the Volunteer Martin Doherty RFB, The Vol unteer Joe Cahill RFB and the Coatbridge RFB.
Alongside the bands, the Cairde na hÉireann cumainn of Coatbridge, Wishaw, Calton, Cranhill and the Garngad were joined by members of the newly formed Clelland cumann.
The march, led by schoolchildren carrying portraits of the Hunger Strikers and black flags, made its way from the Garngad, down High Street and through the Gallowgate  before entering Glasgow Green. There they were addressed by the  national organiser of Cairde na hÉireann  Franny McAdam before being introduced to former POW Robert ‘Dinker’ McClenaghan of Belfast.

EDUCATION IN STRUGGLE
Dinker told the crowd he was amazed at the number of young people that had turned out, many of whom would not even have been born when the Hunger Strikes began. He said:
“Twenty-eight years on, it is an honour and a privilege to come to Glasgow and to see so many people turn out to remember the Hunger Strikers.”
Dinker went on to give the crowd a brief history of the struggle of republican prisoners culminating in the Hunger Strike and pointed out to the crowd that it was the education given and received by the prisoners inside the jails that has led to many of them leading the Republican Movement today.
He finished by thanking the Irish republicans of Scotland for their continuing support for the struggle in Ireland.