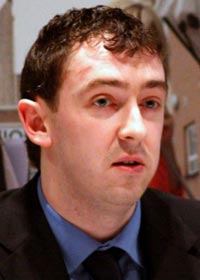 SINN FÉIN North Antrim MLA Daithí McKay has condemned those responsible for a gun attack on a house in the Rossdale area of Ballymena last night.
Mr McKay said; “I want to condemn those responsible for this shooting incident in the early hours of the morning, my understanding is that a number of people were in the house at the time of the attack.” There has been speculation that this incident is related to the flying of flags in that particular part of the town. As we head into the summer months I would call on people to act responsibly in the time ahead. A lot of work is ongoing in Ballymena to try and defuse tensions and that important work must continue. It is totally reprehensible that the issue of flag-flying is being used as an excuse to intimidate members of this community and it must cease immediately”
An Phoblacht
44 Parnell Sq.
Dublin 1
Ireland