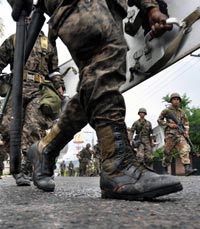 JACK-BOOT: Soldiers patrol a street near the presidential building in Tegucigalpa

HONDURAN  President Manuel Zelaya made one fatal mistake: he genuinely believed the propaganda about ‘democracy’ and the ‘will of the people’ that is uttered most frequently by those who care least for such things.
That fundamental error was enough to merit an early morning visit from the Honduran military, before Zelaya was beaten and unceremoniously bundled onto a flight to an unknown destination. As it transpired the military ‘deported’ Zelaya to nearby Costa Rica.
Zelaya’s ‘arrest’ and subsequent forced exile closely resembled the failed coup against Venezuela’s Hugo Chavez, in 2002, down even to the supposed resignation letter which the military flourished once Zelaya was out of the country.
From his enforced exile, Zelaya has insisted that the resignation letter is a forgery, much as Chavez’ allies stubbornly refuted all claims that he had signed his own resignation and voluntarily gone into exile (the fact that he was being held captive at an army base somewhat undermined that version of events).
And here’s where the problems begin for the Honduran coup meisters. If they have chosen to emulate their Venezuelan counterparts, then Zelaya’s absence from office will be a short one.
After all, the Caracas plotters were the political equivalent of the Keystone Cops: spectacularly disorganised, mostly drunk and utterly bereft of common sense. Thus, having staged a coup to rescue ‘Venezuelan democracy’ their first act was to abolish every single democratic institution in the state.
Nonetheless, they received the endorsement of Washington and Madrid and even the imprimatur of that bastion of liberal opinion, the New York Times. The paper’s infamous April 13 editorial – the coup took place on April 11 – is a spectacular illustration of how the mainstream media will always cleave to power: “Venezuelan democracy is no longer threatened by a would-be dictator. [Chavez] stepped down after the military intervened and handed power to a respected business leader.”
Thankfully, the New York Times does not have a great readership in the barrios of Caracas (it has even less now) and within hours, a popular uprising had ended the 48 hour coup and returned the democratically elected president to office.

PLOTTERS HAVE NO SUPPORT
Already things have started to turn very sour for the Honduran coup plotters: from exile, Zelaya has announced that he will return to confront those trying to oust him – a combination of business, military and senior judiciary.
It is likely he will be accompanied on his trip by at least one senior Latin American leader, with the name of Argentinean President Cristina Kirchner already mentioned. It is also likely he will be accompanied by the head of the Organisation of American States (OAS).
The military have threatened variously to detain or shoot Zelaya if he does return. That approach seems less feasible if he is in the company of regional political heavyweights.
Every single Latin American country – even Colombia – has condemned the coup and demanded Zelaya’s return. The plotters have not one single ally on the continent and several neighbouring countries have even suspended trade with Honduras.
Equally, they find no solace in Washington, traditionally the spiritual home of all South American coup plots and plotters. Indeed, President Obama’s very clear rejection of the coup is yet another sign of the huge shifts that have taken place in Washington. It is perhaps the first coup in Latin American history that has not found favour in either the White House or the Pentagon.
That must be particularly hurtful for General Romeo Vasquez, who was previously fired by Zelaya and then led the coup: Vasquez is a ‘graduate’ of the infamous School of the Americas, the US facility where generations of Latin America’s military were trained in torture, murder and coup plotting. It was more popularly known as the ‘School of the Coups.’
In addition, the UN General Assembly has added its significant voice to Zelaya’s cause while the World Bank has ‘paused’ a lending programme. That will hurt. At this point in time, those who organised Zelaya’s ousting must feel like they have the loneliest job in the world.

ROOTS OF COUP
The coup has its roots in Zelaya’s attempt to begin the process of reforming the country’s constitution – which was written in 1982 when Ronald Reagan was in power and Honduras was no more than a glorified US military base, crucial in the proxy Contra war against the Sandinistas in Nicaragua.
On the day Zelaya was arrested and deported by the military, the people of Honduras were due to vote on the following proposition: “Do you agree that during the general elections of November 2009 there should be (another) ballot to decide whether to hold a Consituent National Assembly that will approve a new political constitution?”
Having sided (regionally) with Hugo Chavez, attacked the ‘sweatshop’ industries that proliferate in Honduras’s special export zones and raised the Minimum Wage by 60 per cent, President Zelaya’s proposition that the citizenry be consulted about the laws that govern them was just a step too for the Honduran elites.
Sinn Féin international spokesperson Raymond McCartney MLA has condemned the coup. Speaking at Stormont McCartney described it as “an illegal attempt to overthrow the progressive social agenda chosen by the Honduran people.” He said that the “democratic wishes of the Honduran people must be respected and must be protected from this illegal move.”