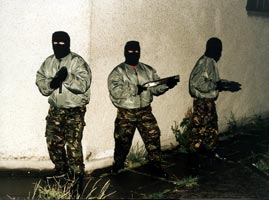 THE weapons decommissioning body has confirmed it has witnessed a “major decommissioning event, involving arms, ammunition, explosives and explosive devices” belonging to the Ulster Volunteer Force and the Red Hand Commando.
In a statement released last Sunday, the commission (IICD) said the leadership of both organisations had advised them that the weapons and materials put beyond use in their presence “included all the arms under their control”.
The commission is scheduled to give a written report to the Irish and British governments at the end of August, the current deadline ending the role of the decommissioning commission. The issue of loyalist and other paramilitary weaponry is scheduled to revert to the criminal justice system after August.
Earlier, General John de Chastelain, head of the commission, had confirmed that he had also witnessed a “significant act of decommissioning by the UDA/UFF”. However, the UDA/UFF had so far failed to destroy all its weaponry, said de Chastelain but added:
“This is a significant move and we look forward to completing the process of putting all UDA/UFF arms beyond use at an early opportunity.”
Previously, British Secretary of State Shaun Woodward had warned that he would pull the plug on special legislation if there had not been “significant progress” on the loyalist arms issue.
“This is the final opportunity to join the rest of society in building a shared future or face the consequences,” Woodward had said. It is currently unclear if the UDA’s actions warrant the “progress” cited by the British minister but a likely extension of the August deadline has already been mooted within the media.

UVF STATEMENT
Initial plans for a joint press conference representing both the UVF and UDA were abandoned and replaced with separate public announcements but both venues and schedules were close.
In the first of two press conferences held last Saturday, church leaders, NIO civil servants and the media gathered in east Belfast’s Mission Hall to hear a statement from the UVF and their off-shoot, the Red Hand Commando.
Photographs were banned when a member of the UVF read out a statement affirming the decommissioning of weapons had taken place, that said:
“The leadership of the Ulster Volunteer Force and Red Hand Commando today confirms it has completed the process of rendering ordnance totally and irreversibly beyond use.”
According to the statement, decommissioning had taken place of weaponry from every operational area and within Britain in compliance with the IICD and in the presence of independent, international witnesses.
Sharing the platform were the leader and only elected member of the Progressive Unionist Party, Dawn Purvis, and her party colleague and former UVF prisoner, Billy Hutchinson, as well as RHC representative Winston Rea.
Declaring “the war is over”, Dawn Purvis described the decommissioning of UVF weaponry as “momentous” and showed that “peaceful, stable and inclusive democracy” is the way forward.

UDA STATEMENT
Moments later, the focus shifted a short distance away at a venue in the Newtownards Road and the UDA statement.
Declaring “the struggle has ended”, the UDA said as a consequence they were putting their “arsenal of weaponry permanently beyond use” and “the process will be completed within the previously notified timescale”.
Tommy Gallagher of the UDA-linked Ulster Political Research Group described the statement as “a milestone in the history of loyalism”.
But within hours doubts were being aired concerning the veracity of UVF claims as well as UDA intentions.
According to a Sunday newspaper, the UVF had kept a significant number of guns and ammunition (including a consignment of “clean” guns) amounting to a third of their original weaponry.
The newspaper claimed the UVF in a number of areas – including the notorious Mount Vernon area, Tiger’s Bay, New Mossley and Shore Road – had refused to decommission and retained weaponry. The newspaper also claimed the South-East Antrim UVF had moved their weaponry to avoid decommissioning.
According to the media, the UVF did hand over a significant haul, including half a tonne of explosives, detonators, rocket-propelled grenades, heavy and light machineguns, handguns and shotguns, more than 300 pipe bombs, and thousands of rounds of ammunition. None of this has been confirmed and may never be.
Together, the UVF, RHC and UDA are responsible for over a thousand killings, the vast majority of whom were Catholic civilians.
Sinn Féin has welcomed progress on loyalist decommissioning but joint First Minister Martin McGuinness ruled out any payments for the weapons moves.
“Money going into any area is on the basis of objective need and there are no other considerations,” Martin McGuinness said.