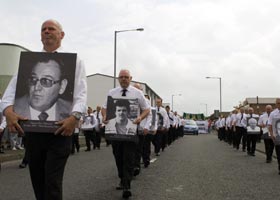 Over 1,000 republicans gather in Derry

ON Sunday past over 1,000 republicans gathered in the bright sunshine for the annual Derry Volunteers Commemoration. This commemoration is a very important event in the local republican calendar.
The march was led  by a colour party and families of the patriot dead who carried floral tributes. Republican activists carried portraits of their fallen comrades from Derry Brigade Óglaigh na hÉireann and several bands  from the city, south Derry and Strabane took part .
The event was attended by the North’s joint First Minister Martin McGuinness of Sinn Féin, party colleagues Mitchel McLaughlin MLA Raymond McCartney MLA and local elected representatives.
Martina Anderson MLA was the main speaker for the day
During her speech Martina Anderson said:
“This year marks the 25th Anniversary of the death of Volunteers Richard Quigley, Ciaran Fleming, William Fleming and Danny Doherty. It is also the 15th anniversary of Paul Kinsella.
“Like their fallen comrades in cemeteries like this across the island and across the centuries, they gave their all in defence of the risen people.
“In time of great peril, they stepped into the Bearna Baoil, the gap of danger. When others stood idly by, they and their families sacrificed everything. When  all seemed at a loss, they persevered. When the night was darkest, they could see the light.
“Against mighty odds they held the line and faced down a huge military foe, the British Crown Forces and their surrogates in the unionist death squads.
“In the fullness of time, future generations – not only in Ireland but across the globe  – will look back in awe at the achievements of Óglaigh na hÉireann and the Irish liberation struggle. They will marvel at how our Army – the people’s Army – faced down the might of the British empire. How ordinary young men and women rose of their knees and out-fought one of the most powerful military machines in the world”
The Derry Brigade Roll of Honour was read by Tiernan Heaney, nephew of IRA volunteer Denis Heaney, and the Roll of Remembrance was read by Aoife McNaught of Ógra Shinn Féin.
Wreaths were laid on behalf of Derry Sinn Féin, the Republican Graves Association, Ógra Sinn Féin, and Óglaigh na hÉireann. The days proceedings ended with the singing of the Amhrán na bhFiann by Sara Griffin.