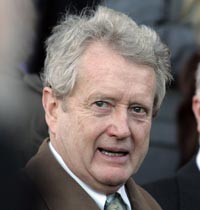 BOWMAN: Watch out Mitchel he’s got an oddly coloured tie!

Fear and loathing in the Irish media

MAITH thú Jim Cusack. Last week this paper pointed out to Jim, one of our biggest fans, that he had ‘accidentally’ omitted to say in his coverage of the Corrib gas dispute that fisherman Pat O’Donnell had turned down compensation from Shell. The way Jim wrote the story implied O’Donnell had taken the money and was therefore being hypocritical for opposing the project.
This week, in a small step for An Phoblacht-inspired journalism in the Sindo, and a giant leap in the standard of Jim’s usual fare he admits that six fishermen have refused to accept Shell’s 30 pieces of silver. A big bualadh bos for our chara mhaith.
But, sadly, he still can’t avoid making mistakes. One of Jim’s big scare stories about the Corrib protests is that the campaign has been infiltrated by Sinn Féin. Over the years Sindo readers have been taught to cower in fear whenever republicans are mentioned or a bearded man with glasses is sighted.
Trying to undermine the people of Rossport Jim argues that ‘no candidate sympathetic to their cause was elected’ in the recent local elections. Damning stuff indeed if true....which it’s not.
Actually two Sinn Féin councillors were elected in Mayo. One of them, Rose Conway-Walsh, took the party’s first seat in the Belmullet ward, where Rossport and Bellinaboy are located (it’s on maps Jim), with almost 1,400 votes.
So either Sinn Féin no longer supports the local fishermen and residents who have genuine concerns about the Shell project, which isn’t true, or Sinn Féin didn’t elect two councillors in Mayo, which we know they did. Great story Jim, it’s just the facts that let you down. Again.
And while scaremongering about republican bogeymen he ignores a slightly more serious threat. IRM-S, the security firm Shell hired to protect its facilities, has come under scrutiny for alleged links to fascist east European paramilitaries and a plot to overthrow the democratically elected government of Bolivia. Jim reckons Sindo readers don’t need to know about these concerns.
Anyway, hopefully Jim will continue to pick up the finer details of what’s going on in Corrib from here and correct his articles accordingly.

Where were you when the last Questions & Answers was broadcast? It’s a question your grandchildren are unlikely to be asking. Desperately tired and with an over-inflated sense of its own importance the show stumbled into the dark on Monday night with self-indulgent recollections of its ‘great moments’.
What was also interesting was the return of John Bowman’s more open loathing for Sinn Féin. During the mid-’90s, when Sinn Féin representatives first started to appear on the show, it was all Bowman could do not to try to strangle Mitchel McLaughlin or Gerry Adams with one of his oddly coloured ties.
It’s actually not widely known but at one point the Sinn Féin Press Office used to issue Mitchel with an improvised taser for self-defence in case Bowman went completely mad.
In recent years, while presumably not changing his politics, he toned it down a little but on his last night, he selected as many anti-Sinn Féin clips as he possibly could for the show’s ‘greatest moments’. He then went on to try and engage an on-form Mary Lou McDonald in an argument about whether semtex could be used for defensive purposes (sooo 2003!). And by the way John, I’m reliably informed that when used for improvised grenades it can certainly be used to encourage the bad guys to stay down the other end of the road.
I knew the show, and possibly me, had been around too long when I started to recognise members of the audience. That one’s a Fine Gael local election candidate from 2007, she’s the girlfriend of that cute guy in the Labour party, and so on. Many is the time I saw candidates or apparatchiks for one party or another in the audience posing as disinterested civilians. Sometimes Bowman would point out their party background – always if they were Sinn Féin, and sometimes not.
It even crept onto the panels. On Monday night one of the panellists was introduced as ‘Catherine Ghent, solicitor’. It was no doubt an accident that the words ‘...and leading SDLP supporter and former vice-chair of its Dublin branch” were omitted from the intro. Viewers at home would have been treated to Catherine’s views of John Hume (approaching sainthood it seems) and her belief that the moderate parties that took risks for peace (who can she mean?) had lost out from the Peace Process without knowing she has a party membership card in her pocket.
Throw in the wisdom of Fergus ‘Two Tribes’ Finlay, still stoutly pushing the line argued by the British embassy for 30 years, and you had a panel heavily loaded against a lone Shinner. Just like old times. They’d even given Mary Lou the taser.
And though part of me is sad to see any forum for political debate go, all Questions & Answers really served as was a place for Ireland’s political or media elite to talk to each other. Alternative views  – republican, socialist, radical left, anti-Lisbon, were there to be ridiculed and, if that wasn’t possible, ignored. We can look forward to Bowman doing the same in his new show, whatever that will be.