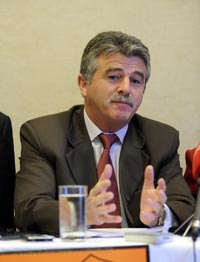 SINN FÉIN Spokesperson on Workers’ Rights Arthur Morgan TD described this week’s CSO report on public sector employment and rates of pay as “misleading”.  Morgan said the high rate of average pay across the public sector can be put down to the exorbitant rates of pay at higher levels and that many thousands of public sector employees earn little more than the minimum wage.
“Of course there are many deficiencies within the public sector that need to be ironed out not least the exorbitant rates of pay at the higher levels and the vast wastage of money on administration and consultancy,” said the Louth TD.
“However the CSO report on public sector employment paints a misleading picture in that it depicts the average public sector worker as earning well above the average industrial wage. It is the exorbitant rates of pay at the higher levels which brings the average pay up to the level it is at. Meanwhile there are many thousands of public sector workers earning little above the minimum wage. These workers must be protected from any proposed cutbacks by ‘An Bord Snip Nua’”, Morgan said.
He went on to say that the increase in the number of public sector workers over the past twelve months is a simple reflection of increased demand for public services as the recession begins to bite. There are now growing demands on the welfare system as more and more people are made unemployed as well as growing demands for public transport as the motor trade is in decline while demand on the health services increase as private health insurance declines. Despite this increase in demand for public services, employment in the public sector is beginning to decline with a decrease of 2,900 in the first three months of this year.
Morgan concluded by saying, “The message that needs to go to Government is that, yes there are deficiencies that need to be sorted but it is wastages and higher level pay rates that should be hit while the average public sector worker is protected along with the vital services they provide.”
An Phoblacht
44 Parnell Sq.
Dublin 1
Ireland