Residents say there is a win-win solution to contentious march 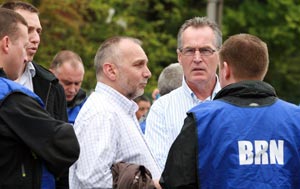 RESIDENTS in the Springfield Road area of west Belfast have called on the Orange Order to “get real” after another Orange parade was pushed through the nationalist area without their consent.
Despite hoax bomb alerts and some stone-throwing from a small number of youths, Saturday’s controversial Whiterock Orange Parade passed off peacefully but, as a spokesperson for local people pointed out, not without considerable distress and disruption to residents living in the area.
Seán Murray of the Springfield Residents’ Action Group said:
“There were some aspects of the parade that were inflammatory, including the participation of well-known UVF and UDA bands. For those who have lost loved ones to loyalist violence, that is highly insensitive.
“We respect everyone’s right to practice their culture but are loyalist bands part of Orange culture? I’ve spoken to Orangemen who insist they aren’t, so why are they still being invited to parade?
“The Order has to recognise the rights of people living along the Springfield Road. They want a resolution, they deserve a resolution. It isn’t enough to manage a bad situation from year to year.
“It’s incumbent on the loyal orders to get real and work out a meaningful resolution with local residents. And there is a straightforward solution, a win-win scenario which would see the entire Orange parade go through Mackies and avoiding the nonsense of opening gates at Workman’s Avenue solely to allow Orangemen to march where they’re not wanted.”
The residents’ spokesperson said he believes that, out of a number of ongoing controversial Orange Order parades, this one is one of the easiest to resolve if the will exists to negotiate.
“There is going to be pain for both communities in reaching a resolution but it’s possible and all it requires is leadership and resolve. We are prepared to give leadership to our community but, unfortunately, it hasn’t been forthcoming on the other side.”
Murray condemned the action of ‘dissident’ micro groups who added to the tension, delaying the parade for an hour until their telephone warnings were exposed as an elaborate hoax.
“These people don’t act in the interests of our community; they don’t have our support. They only fuel tensions and we are totally against what they did.”

THE ORANGE ORDER: Get real!