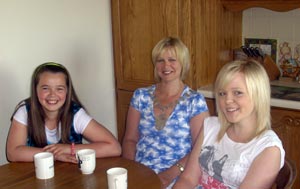 TEA WITH THE MAYOR: Sandra McLellan with daughters Kelly and Lorna

CORK was another constituency that performed well in the recent local elections. It was the result of patience and motivation, attributes a long time associated with the county. Whether on the field of sport or more serious battlefields, you have to hand it to Cork.