Strong support for cause of Irish unity in San Francisco 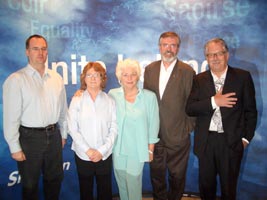 SINN Féin had a capacity crowd in San Francisco on Saturday, 27 June at the second of its two major US Forums on the theme of a United Ireland and the role of Irish America in helping to achieve it – and a euphoric Gerry Adams sat in a San Francisco pub – Fiddlers Green – and watched Antrim win an Ulster senior football semi final while sitting among a crowd of Tyrone supporters.
San Francisco was also celebrating gay pride weekend and was alive with colour, music and throngs of visitors from all parts of the world.
The Forum had seating for 600 seats but it was standing room only as Gerry Adams entered St. Anne’s Hall. The smile on his face told the story of a very happy Antrim supporter buoyed up by the success of his county team. The Sinn Féin President sang the praises of Antrim and threw down the gauntlet to all the Tyrone supporters in the hall   – ‘We’re coming for you on July 19th in Clones!’
As in New York two weeks ago a distinguished panel addressed the theme of a United Ireland. They included Professor Ruán O Donnell, Head of the History Department at Limerick University, internationally acclaimed actress Fionnuala Flanagan, renowned Irish artist Robert Ballagh and John L Burton, Chairman of the California Democratic Party.
Gerry Adams told those present that the US conferences are only the beginning of a new phase in the struggle to achieve Irish reunification.
The efforts of Irish Americans had in the past he said made an enormous difference, for example in raising awareness through the MacBride Principles campaign, on the issue of discrimination in employment, and forcing a reluctant British government to introduce tougher anti-discrimination legislation.
“A united Ireland can only be achieved by the people who live on the island of Ireland. However, as the Peace Process has shown the Irish diaspora, and particularly Irish America, has the ability and the political influence to significantly advance the goal of Irish reunification”, he said.
Over two dozen speakers from the audience representing a wide range of Irish American organisations also addressed the hall.
There was an enthusiastic welcome for the conference and an eagerness on the part of all of the speakers to begin this new phase of struggle. The ideas mirrored those made at the New York conference – lobbying state and national legislators and legislative bodies; proposing resolutions for city and municipal and community organisations; securing the support of other Irish American organisations; e-mailing campaigns; letter writing; holding other similar type conferences and much more. Making maximum use of social networking sites like Youtube and Facebook was a constant theme.
One speaker was applauded when he suggested that an effort should be made to co-ordinate all of the St. Patrick’s Day events in the USA and to ensure that they adopt the united Ireland theme. Another spoke of the support which the Irish struggle had won over the years from other ethnic groups and that a real effort should be made to win support for a united Ireland from them.
Concluding the Forum Gerry Adams said: “The breadth of representation from Irish America at the two conferences is evidence of how much Irish America cares about what is happening in Ireland and of the desire to achieve a united Ireland.
Irish freedom and independence has been a dream of Irish people for many centuries. We have the ability to do more than dream. We can be the generation that can actually achieve. Let’s go and do it.”