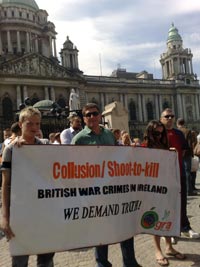 MILITARY STUNT
Speaking on the issue last week, Sinn Féin Councillor Paul Maskey said:
“This is another cheap political stunt by the British Ministry of Defence which remains unwilling to explain to families in this city its role and the role of the British Army in the murder of hundreds of Irish citizens.
“Sinn Féin explained in council and won the argument at committee that the British MoD’s armed forces flag should not be flown from our city hall. However, other councillors held that committee decision in contempt and reversed it at the full council meeting. In doing this, all those who have backed this proposal show disregard for the offence which this will cause to the families in our city and in our country who have been bereaved by the British armed forces.
“In response to concerns raised with Sinn Féin by those families, we have requested a meeting with the Mayor of Belfast, Naomi Long, so that the grievances of families bereaved by British state violence can be put to the city’s First Citizen.
“We will also support the families and campaign groups in making a dignified protest at this political stunt by the British MoD.
“We will continue to work with those bereaved by state murder to ensure that their experience is appropriately acknowledged and that we create a city where their rights are upheld.”

RELATIVES FOR JUSTICE
Paul Maskey and party colleague Deputy Mayor of Belfast Cllr Danny Lavery (whose brother and nephew were murdered as a result of collusion) accompanied a delegation from Relatives for Justice last Thursday at a meeting with Mayor of Belfast Cllr Naomi Long. The meeting was facilitated by the Sinn Féin council group.
Speaking after the meeting, Paul Maskey said:
“Today’s meeting was a useful and no doubt productive exercise. Our hope and the hope of the families who attended today’s meeting is that this is the beginning of a process where the experience of all victims within the city is recognised and commemorated.
“It was acknowledged that Belfast City Hall is currently not reflective of all citizens’ experience of the conflict here and that, through the Good Relations Unit of the council, the families who have lost loved ones as a result of collusion and state violence can begin to be recognised within their own city.
“I want to commend the families for their immense courage and dignity in ensuring that their loved ones are not forgotten. I look forward to the process of engagement continuing in the time ahead.”

BLACK RIBBONS
On Friday last, while the Belfast City Hall gates where adorned with large black ribbons, protesters held banners with anti-collusion and ‘state murder’ slogans on them. The crowd was addressed by Relatives for Justice Director Mark Thompson and Sinn Féin MLA Gerry Kelly before 70 black balloons where released into the air representing all the young people who were murdered by the British Army.
Speaking at the protest, Ógra Shinn Féin activist Chris Conwell said:
“Ógra Shinn Féin joined in solidarity with RFJ and the families of those murdered through British state violence to demonstrate our anger and disgust at this blatant triumphalism.
“The decision by Belfast City Council to fly the British Army flag is an attempt to create a hierarchy of victims and make the council a cold house for nationalists and republicans.
“Ógra Shinn Féin have constantly stood with the families in their long struggle for truth and justice. We have consistently campaigned for truth around the many cases of collusion and British state murder and opposed other coat-trailing acts of triumphalism by the British Army, like the UDR/RIR ‘homecoming parade’ in Belfast last year.
“We have also campaigned vigorously for the demilitarisation of the British war machine in Ireland and this further attempt at glorification of a foreign murder machine was rightly challenged today, not only by political activists but also by those most affected by its brutal legacy in Ireland, the families of the victims.
“This brutal murder machine still acts as an army of occupation in Ireland and continues to engage in the same acts of state murder and collusion in Afghanistan and Iraq today. It is disgusting that an army engaged in daily massacres of men, women and children can be afforded official recognition by some sections within Belfast City Council – they should be ashamed of themselves.
“We will continue to oppose the British war machine and stand in solidarity with the families of their victims in their rightful case of truth and justice.”