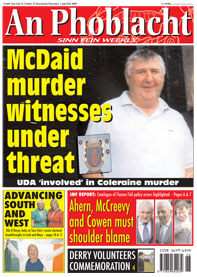 AN ongoing campaign to intimidate witnesses to the sectarian murder of Coleraine Catholic Kevin McDaid has been confirmed by the High Court in Belfast after lawyers disclosed that ten people were now under threat. The information emerged as one of the men accused of the killing was refused bail.
Opposing the bail application of 48-year-old David Cochrane, who is accused of causing an affray, Prosecution barrister Peter Coll said the defendant had been part of a group shouting sectarian abuse when Kevin McDaid was attacked close to his home.
A second man, Damian Fleming, was critically injured by a sectarian mob, who targeted both men because they were Catholics. Kicked unconscious and on life support for days, Damian was not expected to live but miraculously survived. He has been able to name members of the gang that carried out the attack but now lives in fear for his life.
According to the prosecution, the PSNI have issued official warnings of death threats to six witnesses to the incident, advising them that their lives are now in danger. A further four witnesses have made complaints to the PSNI that they have been personally threatened, told to leave Coleraine and warned against giving statements to the police.

UDA INVOLVED IN MURDER
“It is further the police view that UDA members were involved in the murder of Mr McDaid, the attempted murder of Mr Flemming and the wider incident,” said Coll.
The barrister highlighted “widespread fear in the local area” and witnesses “fearful for their lives and the lives of family members” and reiterated the belief that members of the UDA were involved in the killing.
Refusing the bail application, presiding Judge Hart accepted as “significant” that a number of witnesses believe they are at risk and have received notification of threats against their lives.
“The extent of the events themselves and the nature of the threats to so many people all suggest there are a number of people who may well be determined to intimidate actual or prospective witnesses,” said Hart.

ORANGE MARCH
As An Phoblacht goes to press an Orange Order march is scheduled to pass close to where Kevin McDaid was murdered. This will be the second march held by unionists since the killing. A few days after McDaid died and during a time when the body was still being waked at his family home, a loyalist band, one of whose members has been implicated in the murder, brought around 2,000 supporters onto the streets.
Prior to the band parade, hate crime messages were posted on a loyalist website, urging the band to play “loud so they can hear you over the river”, and afterwards celebrated the fact that “the McDaid family could hear you loud and clear as the coffin returned home”.
In the run up to the second parade, this time by the Orange Order and possibly accompanied by the same loyalist ‘Pride of the Bann’ band, loyalists attempted to erect flags in the Heights area close to where Kevin McDaid was murdered.

LOYALIST FLAGS ERECTED AT MURDER SCENE
Loyalists entered the area around 6pm last Friday, 26 June and began putting up flags and taunting nationalist residents. Several flags were placed on a lamppost directly at the scene of the killing. Children in Catholic school uniforms were told to “fuck off home”.
A relative of Kevin McDaid was injured after he became caught up in a skirmish close to the scene where his cousin had died. He was arrested by PSNI officers at the scene and is currently facing charges of behaviour likely to incite hatred.
Anti-Irish racism and anti-Catholic sectarianism is often so ingrained in the North that the officers who arrested and charged the murder victim’s cousin are probably unaware of the hypocrisy of their actions.

ROLE OF UNIONIST POLITICIANS AND MEDIA
In the immediate aftermath of the McDaid murder, unionist politicians and the media attempted to justify the actions of the loyalist killers by identifying the flying of a flag supporting a Catholic football team in a nearby nationalist area as so provocative that it could provide some sort of explanation.
Local nationalists had already made an agreement to remove the allegedly ‘offensive’ flag the following day after the conclusion of the Scottish football tournament. But that was insufficient to mollify the sectarian hatred of loyalists who still believe croppies should lie down, and be seen to lie down.
It was an action of pure provocation by loyalists to return to the scene of a despicable sectarian murder and attempt to erect flags. But the provocation was apparently invisible to the PSNI officers at the scene who made no attempt to deter loyalists putting up flags.
Subsequently the Orange Order, fearing their proposed march might risk being banned, removed the flags and voluntarily rerouted their parade away from the actual street where the McDaid family live and Kevin McDaid died.
The officers and brethren of the Coleraine lodge expressed “a great deal of sadness and indeed no small amount of anger”. But they weren’t sad on behalf of the McDaid family or angry at the loyalist flagsters.
“They resent the way in which they have become embroiled in a controversy,” reported the Newsletter, and they feel concerned that attempts to deny them their traditional route are being motivated by “certain party political agendas coupled with a reluctance to understand the significance, nature and culture of the event in question”.