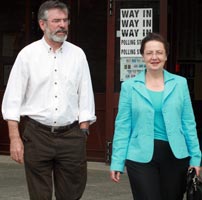 At THE POLLS: Bairbre takes it in her stride

THESE EU elections were among the most difficult Sinn Féin has ever contested. In the Six Counties motivating turnout was always going to be a key factor and the party’s success in topping the poll and maintaining a 26% first preference vote share is testimony to a hugely successful campaign.
In the 26 Counties the party came under sustained negative campaigning and opposing party political tactics deliberately designed to undermine and target the Sinn Féin vote. Sinn Féin polled 11.2% of the total 26-County EU vote, up slightly on 2004.
In Dublin the systematic and sexist attacks by the establishment political parties on Mary Lou MacDonald in the last weeks of the campaign showed just how underhand they can be.
Fianna Fáil minister Mary Hannafin admitted in Newstalk that the selection of Pat ‘the Cope’ Gallagher to run in North West was solely motivated to undermine the Pádraig Mac Lochlainn campaign.
Mac Lochlainn was also running for town and county council seats which he successfully won for Sinn Féin but still had to weather questions about giving up local authority representation to be an MEP. Fianna Fail’s Gallagher is a sitting TD!
In Munster, the killing of Jerry McCabe in 1997 was yet again raised, just after a second opinion poll confirmed the growing support for Toiréasa Ferris who narrowly missed out on winning the third seat for Sinn Féin in South.

Dublin
In a much tighter race than in 2004 with the constituency crucially losing a seat – going from four seats to just three – this was a key battle for all political parties.
Sinn Féin’s winning of a seat in 2004 confirmed how disillusioned large sections of the electorate are with establishment politics, 2009 election showed similar results.
The Sinn Féin vote share was down on 2004, but displayed huge resilience considering the campaign to undermine Sinn Féin in the city, particularly the lack of fair news coverage in the print media throughout 2009.
The importance of the Sinn Féin vote in electing Joe Higgins to the last MEP seat cannot be underestimated and shows that there is a substantial core of left republican votes in the city, the potential development of which cannot be ignored in the coming months when it comes to broad based campaigns against a government obsessed with cut backs and penalising those who can least afford to pay for its failures.

East
The ongoing growth in the Sinn Féin vote echoed new council victories in Wicklow, Kilkenny and Offaly and showed the long term potential of the party to add to its one Leinster House seat in this region. The implications for Wicklow and Carlow Kilkenny are immense.

South
The growth of Sinn Féin as a political party is aptly demonstrated by the South EU vote where party support is in 2009 more than 12 times greater than 1994, just 15 years ago.
The growth in the party vote in Cork, Kerry and the more rural electoral areas of Waterford show further potential for Sinn Féin in terms of Leinster House representation.
Toiréasa Ferris polled third on the first count and hung onto until the seventh, with her transferable votes split almost evenly between Labour’s Alan Kelly and independent Kathy Sinnott.

North West
Having been almost caught out in 2004 when the Sinn Féin vote trebled Fianna Fáil were determined to scupper the party challenge in this region at every opportunity. The deliberate confusion and smokescreen around candidate selection in the North West show how little real value Fianna Fáil put on being an MEP.
Mac Lochlainn’s vote though not as high as 2004 was still a significant statement of the anti government sentiment in the region and with so many candidates plumping to contest this constituency it was all the more remarkable to hold up the Sinn Féin vote given that so much airtime and news media coverage was been given to other candidates particularly Declan Ganley’s theatrics in forming Libertas to contest elections.

Six Counties
Holding the seat and topping the poll was a significant first for Sinn Féin in this election where too little media focus is put on EU issues. It also emphasises Sinn Féin’s role as an all-Ireland political party.
Much of the media coverage was on the three way unionist contest for two seats and ignored the failure of the SDLP to make any headway in this election.