The rise of the Right must be resisted 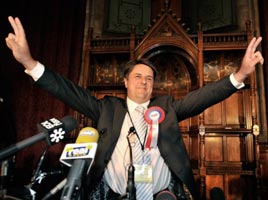 LAST WEEKEND, people throughout the 27 EU member states cast their votes to elect 736 Members of the European Parliament.
Turn-out was a paltry 43%, the lowest in the three decades of European voting. Voter apathy was widespread with over half of the electorate choosing to stay at home, politically apathetic due to ubiquitous corruption scandals, democratic deficits and failing to see a real political alternative in their respective countries.
In some eastern European countries, turn-out languished around the 20% mark. Despite the fact that the European Union is responsible for 80% of member states’ legislation, to voters the EU seems distant and not worthwhile, a suspicious unelected bureaucratic monster for many with its mysterious yet powerful Commission.
There was only one victor in these European elections, and it certainly was not the Left.
Conservative and far-right parties enjoyed electoral success and subsequent seat gains.
Martin Schulz, German MEP and leader of the Party of European Socialists group, admitted: “Overall, this is a very bitter evening for us.”
The centre-right consolidated its power whilst the xenophobic far-right made worrying forays into the political mainstream. With the scapegoating of immigrants for society’s ills, the far-right appealed to a substantial number of voters, some for different reasons.
The British National Party (BNP), heirs of the neo-nazi National Front, won two European Parliament seats. Veteran racist and former National Socialist Movement and National Front member Andrew Brons was elected for Yorkshire and Humber with the BNP polling nearly 10% there. Their leader, Nick Griffin, pelted by eggs on Tuesday by anti-fascist protesters at an aborted BNP press conference at Westminster, won a North-West seat with 8% of the vote, an increase from last time out. This is a party that refuses membership to black people and has stated that “Britain is full up” and immigrants should be ‘sent back’. The BNP actually secured fewer votes than last time out but gained two seats – its first ever – because of the low turn-out for the other parties, particularly Labour.
It is the Labour Party’s worst election since 1918.

FRACTURED LEFT
In France, Prime Minister Nicolas Sarkozy and his conservative UMP convincingly defeated a fractured left that is in disarray. In neighbouring Spain, the ruling socialist PSOE were beaten into second place by the centre-right Partido Popular.
In Italy, although controversial leader Silvio Berlusconi’s Freedom Party support dropped slightly, his far-right coalition partners, the xenophobic Northern League, which prides itself on its anti-immigration stance, rose to 10.6%. Italy’s main opposition, the Democratic Party, an eclectic mix containing Christian Democrats and Socialists, nosedived 7%.
The German Social Democrats suffered electoral ignominy with its worst showing since the Second World War. Even the new left German Party, Die Linke (The Left), failed to fulfil prior expectations, polling only 7.5%.
In Poland, the governing pro-capitalist Civic Platform party amassed 25 seats, with the homophobic Law and Justice party scooping 15.
In the Czech Republic, the centre-right Civic Democrats were successful despite the appallingly low turn-out of below 30%.
The far-right gained considerably in the Netherlands with a return of four MEPs for Geert Wilder’s Freedom Party, criticised for its anti-Islamic nature. Austria’s Freedom Party polled around 13%.
In Hungary, the notorious radical, anti-Semitic and neo-fascist Jobbik Party won three seats, almost beating the ruling Socialists, rocked by corruption scandals, who got one more. Fidesz, the main centre-right opposition won 14 of the available 22 seats.
Romania’s far-right Greater Romania Party also increased its vote and in Denmark, running on a nationalist, anti-immigrant and populist platform, the Danish People’s Party got two seats.
Glimmers of hope for the Left surfaced only in Greece, Latvia, Malta, Slovakia and Sweden.

PROTEST VOTE OR SINISTER DEVELOPMENT?
So does one take this electoral advent of the far-right as a consequence of a protest vote or is it a more sinister development with fascism being embraced by some as an alternative?
Voter apathy is a major problem. The rise of the Right has been possible due to the crisis on and fragmentation of the Left. There are nominal socialist parties throughout Europe who have failed to articulate an alternative to the current capitalist system that is in crisis.
Instead of moving to the centre, these parties should be forging left links, building a mass movement and tackling xenophobia, racism, and sectarianism head-on. We should be countering the Right’s attempts of dividing the working-class along religious, ethnic, national or whatever lines.
The sore of fascism will fester only if the Left continues to be its worst enemy and turn on itself. The collective energy of the Left should be aimed at combating and defeating the Right. The EU is once again in the hands of the Right, though not in the right hands. A ratification of the Lisbon Treaty would have major repercussions which such pro-capitalist parties at the European helm.
Four years after the Wall Street Crash and Great Depression, Hitler came to power in Germany. It is the Left’s role to ensure that such a development is never allowed to happen again.
An Phoblacht
44 Parnell Sq.
Dublin 1
Ireland