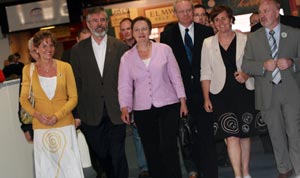 SINN FÉIN MEP Bairbre de Brún was re-elected to the European Parliament, topping the poll in the Six Counties in last week’s EU elections. This was a truly historic development as de Brún is the first nationalist to top the poll and Sinn Féin is now the largest party in the North of Ireland.
De Brún, elected on the first count, broke a record held by the DUP since 1979. The Sinn Féin MEP got 126,184 votes and was the only candidate to reach the quota on the first count.
Jim Nicholson of the Ulster Conservatives and Unionists was the second MEP returned, elected at the third stage.
Diane Dodds of the DUP took the final seat, also at the third stage. She had the second-highest number of first-preference votes, 88,346, just ahead of the Ulster Conservatives and Unionists with 82,893.
Anti-Agreement unionist Jim Allister got 66,197 first preferences, but was later eliminated.
The DUP had 32% of the entire first-preference vote in 2004; this time it has fallen to 18.2%.