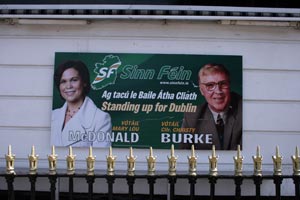 DUBLIN City Councillor Christy Burke has resigned from Sinn Féin just days after the results of the Dublin Central by-election and the Local Government Elections in which he stood as a Sinn Féin candidate.
Burke received the full backing of Sinn Féin in the by-election contest where he was nominated by party vice-president Mary Lou McDonald and in the contest for a council seat in the North Inner City ward. He has now publicly declared his intention to keep the seat, which he won on a Sinn Féin ticket and that he will act as an Independent councillor. This is despite the fact that prior to the election he signed a solemn pledge that if elected he would abide by the directions of Sinn Féin and that he would resign his seat if he left the party.
During both election campaigns Christy Burke had the full co-operation of party members and activists in the constituency and at all levels of Sinn Féin.
In media interviews on the day that he resigned, Burke indicated that he felt he could more successfully pursue his electoral ambitions outside of Sinn Féin.
Commenting on Burke’s actions, the Chairperson of Dublin Sinn Féin Aengus Ó Snodaigh said:
“Christy fought the council and by-election campaigns under the Sinn Féin banner with the full support of the party. His decision to resign from the party only days after being elected on a Sinn Féin mandate is disappointing not least because it runs totally against the commitment which he made to the party and electorate only weeks ago when he sought and received the endorsement of a Sinn Féin election convention.
“He has been a republican activist all of his life and is recognised for his contribution. He should now honour the commitment that he made only weeks ago and return what is a Sinn Féin seat to the party.
“We are in the process of completely re-organising the party in Dublin Central blending experience with new people. Sinn Féin has always stood side-by-side with the people of this constituency and this will continue into the future.
“Sinn Féin is building the party right across the country and will continue to pursue and popularise our republican objectives of a united Ireland with equality and social justice for all.”
Sinn Féin in Dublin Central is establishing working groups in a number of areas and is building the party and recruiting members in the area. Supporters who are interested in involving themselves with Sinn Féin’s ongoing work in Dublin Central are asked to contact local party structures or Dublin Sinn Féin at 44 Parnell Square, Dublin 1. Phone: 8726100/8726932