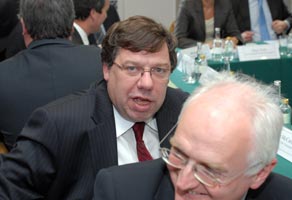 This government should go

THE Fianna Fáil/Green Party Government should pack its bags and go, Sinn  Féin  Dáil  leader  Caoimhghín  Ó Caoláin told deputies as republican TDs backed the no-confidence motion tabled by Fine Gael on Tuesday and voted on on Wednesday.
Brian Cowen and John Gormley should resign  and  face  the  people  in a general election, the Sinn Féin TD said.
“The  people  very  clearly  have  absolutely  no confidence in this Fianna Fáil/Green Government. They have shown that by their overwhelming vote last Friday in the local and European elections.
“This  is  a  disastrous  Government  and  with no mandate. They have no political authority to govern and no competence to govern.
“400,000  unemployed  people  and  their  dependents  demand  that this government  should  go. The many thousands of workers whose incomes have been  hit  by pay cuts, short-time working and unfair levies demand that the Government should go.
“People  hit  by  savage cuts to public services in health and education demand that this Government go.
The Cavan/Monaghan TD said that the  coalition  of corrupt politicians, property developers and bankers brought  the  economy to its knees and they will not and cannot lead it into recovery. “They should all be turfed out,” he thundered.
People  have  not  punished  the Fianna Fáil/Green Government because a global  recession  has  hit Ireland, Ó Caoláin said. They have done so because they know the  recession  is  worse  here as a result of the disastrous policies  pursued  by  Fianna Fáil and the PDs for over a decade and the disastrous  decisions made by Fianna Fáil and the Greens over these past two years.

TOTALLY OUT OF TOUCH
“This  is a government totally out of touch with the people. A couple of weeks  before  the election, Finance Minister Brian Lenihan claimed that social  welfare rates in this state are ‘far more generous than those in other countries’ and suggested that they are a disincentive to work.
“His  suggestion  is  an  insult  to  the  tens  of  thousands of people dependent on social welfare who are struggling from week to week.
“Minister  Lenihan  should try living on the €204.30 per week Jobseeker’s Allowance! Or,  better  still, he should try living on €100 per week, the new  rate  for  unemployed  people under 20, after the Fianna Fáil/Green Government’s savage budget cut to Jobseeker’s Allowance for young people.
“Thousands  of  people are joining the dole queues every month thanks to the  disastrous  policies  of  this government. But instead of coming up with  a real job-retention and job creation strategy, Minister Lenihan is preparing  to  cut  social welfare on the spurious basis that unemployed people  don’t want to work because welfare payments as so generous. They are to have more hardship inflicted on them to spur them on to find jobs that do not exist.”

SINCE 1997
The Sinn Fén deputy said that policies  pursued by Fianna Fáil-led government since 1997 have led us to where we are today.
“Minister  of  State  Dick  Roche  claimed on radio today that no-one in political life objected to the total dependence on the construction boom and the property bubble which is so clearly responsible for the depth of the  recession  in  this  state  compared  to  other EU states. Minister Roche’s claim is completely false.
“We  in  Sinn Féin stand on our record in that regard. In November 2003, at the Construction Industry Federation conference, then Minister for Finance  Charlie  McCreevy  actually  asked  for advice  from  the assembled developers  and  property speculators on housing policy.
“I stated at the time  that  the  Government,  in  tandem  with  the  same developers and property  speculators, was directly responsible for the spiralling price of  houses. It was at the behest of the Construction Industry Federation that  the Government gutted Section V of its own Planning Act 2000 which required  20%  of  new  developments to consist of social and affordable housing.
“The  housing policy of the Fianna Fáil-Progressive Democrats government was  totally  market-driven.  As a result, we had massive local authority waiting  lists and even people on above average incomes could not afford a  home.  Between  1998  and 2003, the price of a new house in this state rose on average by 177%!
“But  in terms of policy, nothing has changed. The recent Budget actually slashed  the  funding  for  the  provision  of  social  housing by local authorities. The Government has learned nothing from the failures of the past  decade. It  acknowledges  no  fault  on  its own part and that is absolutely galling and infuriates people up and down this country.”

SAVAGE CUTS
Ó Caoláin pointed out that, as  well  as  mounting  an assault on low-income to middle-income earners, this Fianna  Fáil/Green Government is imposing savage cuts to public services that will have extremely damaging long-term consequences.
“The  Irish  Nurses’ Organisation and SIPTU have already indicated to the HSE that it will not be possible to run the public health service in the context of the recruitment embargo as announced by Government.
“Waiting  lists  and  A&E queues are as bad as ever and will worsen with the massive cuts in jobs in the public health service.
“The Government has repeatedly claimed that one of the factors that made  us  an  economic  success story was a young, well-educated workforce. Yet what  have  the  Government  done to education? They have cut €30 million from the school building programme. This is on top of the education cuts already introduced, cuts which hit the most vulnerable, such as children with special needs.
“The  cut  in  the  school  building programme is pure folly in terms of education, in terms of public spending and in terms of employment.
“Children  will  continue  to  be taught in overcrowded and sub-standard classrooms. There are 1,400 schools on the school building waiting list; 100,000  additional  pupils  will  enter  primary  school  over the next decade – where will they be accommodated?
“The  Government  should  be  increasing  and  front-loading the Schools Building  Programme  as  part of a job creation strategy, as proposed by Sinn  Féin  in  our  comprehensive  employment  retention  and  creation document ‘Getting Ireland Back to Work’.”
And Caoimhghín Ó Caoláin didn’t relent as he lambasted the Government as one that is “bankrupt not only  in  finances  but  bankrupt  in  policies,  bankrupt in skills and bankrupt  in  ideas
“It  is  time for you all to pack your bags and follow the Taoiseach out the back door.”