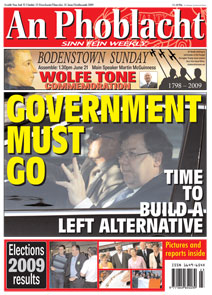 LAST WEEK’S local and European elections in the 26 Counties have seen a massive defeat for the Government parties with Fianna Fáil obtaining the lowest share of the vote in its history and the virtual wipeout of the Greens.
In the two Dublin by-elections, Fianna Fáil was pushed into third place in Dublin South and fifth place in Dublin Central.
The election of Fine Gael’s George Lee in Dublin South and of Independent Maureen O’Sullivan in Dublin Central has cut the Government’s Dáil majority to just three.
In the local elections, the Fianna Fáil share of the vote dropped to 25%, a drop of 7% since the last local elections in 2004 and a drop of 17% since the general election two years ago, while the Greens were down over 1% to 2.4%.
Following the election results, Sinn Féin President Gerry Adams said that the Fianna Fáil/Green coalition has lost the moral authority to govern and that a political alliance for change must now be built.
Adams said the election has been a good one for Sinn Féin and that key gains have been made in several constituencies, such as Wicklow where the party took two county council seats, in Limerick City where Maurice Quinlivan made a significant breakthrough, in Waterford, Kerry, Carlow, Offaly, Mayo and Cork.
“I want to thank everyone who stood for the party, who worked for the party and especially those who voted for the party,” Adams said:
He acknowledged that there have been some losses in Dublin but said that the focus in Dublin was the EU seat, where, although she lost, Mary Lou McDonald  polled very strongly.
Sinn Féin also polled particularly strongly in the Ireland South EU Constituency with Toiréasa Ferris as well as putting in strong performances in North West with Pádraig Mac Lochlainn, and in Ireland East with Kathleen Funchion and Tomás Sharkey.
In an historic development, Bairbre de Brún topped the poll and kept her MEP seat in the North.

LEFT UNITY NEEDED
“There has been a clear swing to the Left and I am repeating the call that I made at our Ard Fheis in February for a Left realignment in Irish politics. In councils across the state there is now the potential to form Left alliances and to start providing people with a real alternative in local government. Fianna Fáil and the Greens have lost the moral authority to govern. It’s now time to call a general election,” Adams said.
Gerry Adams said the big story of the election was that the vast majority of people want a “rights-based, decent and fair system of governance”.
Pointing out that the broad left did well, he added that the Left is fragmented.
“Unity needs to be built. That will take time but it does’nt have to wait until the next election. That work must start now.
“It is not good enough to be against Government policy. People need hope and positive, hard-nosed leadership to turn around the economy in the interests of working people.
“In the North, the work of peace-building must continue. That’s what citizens want. Bairbre de Brún’s success is proof of that.”

VOTING DOES MATTER
Sinn Féin deputy leader Mary Lou McDonald said the people of Dublin had shown that voting does matter, that there is a growing momentum for change and that the Government has been sent a strong and clear message that they need to go.
Mary Lou McDonald congratulated the newly returned MEP for Dublin Joe Higgins and wished him well over his term in Europe.
“While disappointed I just missed out taking the third seat, I am very proud to have had the privilege of representing Dublin in Europe over the past five years

‘There has been a clear swing to the Left and I am repeating the call that I made at our Ard Fheis in February for a Left realignment in Irish politics.
‘In councils across the state there is now the potential to form Left alliances and to start providing people with a real alternative in local government.

“I want to take this opportunity to thank everyone who worked on the campaign with me but I would especially like to thank everyone that came out and voted not only for me but for Sinn Féin representatives across the this city and country. I am also delighted that Bairbre de Brún has retained her MEP seat and topped the poll in the North.
“To the people of Dublin, you have shown that voting does matter and there is a growing momentum for change. The Government has been sent a strong and clear message from you that they need to go.
“Together we can build on that momentum and start to turn this country around.
“Sinn Féin will continue to stand up for ordinary people, I will continue for stand up for ordinary Dubliners and be a voice for those this government wants to trample on.”
“This is just the start. Now is the time for a new direction in politics. Let’s continue to drive forward the momentum for change.”