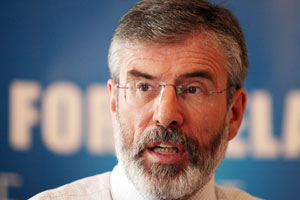 VOTERS in the North are being arbitrarily denied their democratic rights by the Electoral Office through a number of dubious decisions which Sinn Féin has complained about and said may be legally actionable.
Sinn Féin West Belfast MP Gerry Adams urged everyone concerned about the Electoral Office’s denial of the democratic franchise to urgently seek legal representation.
The refusals focus primarily on legitimate postal and proxy applications emanating from mainly nationalist and republican areas.
Speaking this week, Gerry Adams said:
“The latest information which has emerged during canvassing is extremely serious. It fits into a consistent pattern of dubious practices, irregular processes and flawed procedures by the Electoral Office which are undermining the democratic process.”
The Sinn Féin president said this includes:–
•    The rejection of 15,900 applications made by people who wished to join the electoral register last year;
•    Consistent challenges against the eligibility of voters in large families, including public representatives such as Sinn Féin Councillor Terry Hearty; and,
•    Reduced provisions for access to Electoral Office ID clinics (which had previously been discharged efficiently by the Electoral Commission).

UNDERMINING DEMOCRATIC PROCESS
Gerry Adams said:
“In recent days we had had the Chief Electoral Officer making very serious – yet unsubstantiated – allegations about illegal activities undermining the electoral process.
“These remarks have carried the strong implication that nationalist and republican constituencies are responsible. In fact, all of the evidence available to me indicates that it is the Electoral Office which is directly damaging the integrity of the democratic process.
“I believe that the Electoral Office’s arbitrary behaviour is, in a number of cases, clearly actionable.”