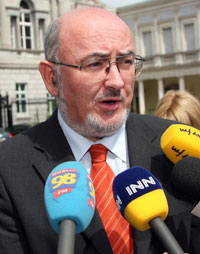 ‘Cowen and Harney are destroying our hospital services’ – Ó Caoláin

COMMUNITY GROUPS, the County Monaghan Community Alliance and Sinn Féin elected reps turned out to defend services at Monaghan General Hospital during an election visit by Taoiseach Brian Cowen to Castleblayney for local Fianna Fáil candidates.
Sinn Féin Dáil leader and Cavan/Monaghan TD Caoimhghín Ó Caoláin said the Taoiseach and Health Minister Mary Harney had rejected last-minute pleas not to proceed with the removal of the last acute medical services from the hospital which was due to take place on 31 May but postponed until after polling day.
Deputy Ó Caoláin revealed that he had received a letter from the Taoiseach declining Deputy Ó Caoláin’s invitation to visit Monaghan General Hospital during his visit to County Monaghan. The Taoiseach states in the letter that he is in regular contact with local Fianna Fáil Oireachtas members and with Minister Harney on the matter.
The Sinn Féin TD said:
“The Taoiseach’s letter to me clearly shows that the only ‘advice’ he wants to hear on this issue is that of Health Minister Harney with the Monaghan-based Fianna Fáil TDs Rory O’Hanlon and Margaret Conlon playing the role of nodding dogs in the back window of Minister Harney’s car.
“Neither the current Taoiseach, Brian Cowen, nor his predecessor, Bertie Ahern, nor Health Minister Mary Harney ever took the trouble to visit Monaghan General Hospital, the services of which they cut by degrees until we have reached the point now where the hospital is about to become a day clinic in all but name.”

The Cavan/Monaghan TD said that the protest by the County Monaghan Community Alliance and by elected representatives from across the county demonstrates the determined and undiminished public support for the hospital and opposition to the plan to destroy it.
“Taoiseach Cowen and Minister Harney have spurned all appeals to reason from frontline hospital staff, from GPs, from the general public and from elected representatives. They have callously refused to accept the reality that the slashing of these hospital services will leave people in this county dangerously dependent on distant hospitals in Cavan and Drogheda and Dublin, and that Monaghan General Hospital’s workload is being transferred to the already over-stretched Cavan General Hospital and without the provision of a single additional in-patient bed.
“Mary Harney has intervened in the current local and European elections to try to save the political skins of her Fianna Fáil colleagues, Eoin Ryan and Brian Cowen, and in a forlorn attempt to put a dent in the Sinn Féin vote. She would be better employed doing her job as Health Minister and taking the time to study the damage she and the Taoiseach are doing as they destroy hospital services, not only in Monaghan but across the state in Dundalk, Nenagh, Ennis, Tralee, Mallow, Wexford and more to come.”