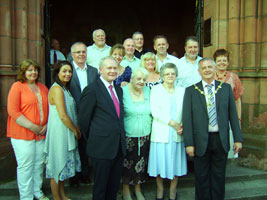 SINN FÉIN Councillor Paul Fleming was elected as Mayor for Derry City on Monday night.
Paul is the second member of the Fleming family to be elected Mayor. His sister, Lynn, was mayor in 2005. This is believed to be the first time in Ireland that a brother and sister have been elected as mayors to the same city.
A crowd of supporters, including joint First Minister Martin McGuinness and Paul’s family, packed the public gallery to see Paul elected as the fourth Sinn Féin mayor of the city.
Paul is the eldest of the family and brother of Volunteer William Fleming, who was killed in action in 1984. Paul was imprisoned from the mid-1970s until his release in the 1990s, when he became a Sinn Féin activist.
Elected to Derry City Council in 2001, Paul has represented the Rural Ward since his election.