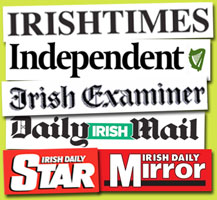 Now for some real news...

TALKING dogs, trick cyclists, rap singers, Facebook outings, sexiest candidate surveys, campaign bus crashes, missing posters, crying babies and football-playing candidates were just some of the election media events covered in Irish daily newspapers last week.
You might ask: ‘Where was the politics, the policies and the debate?’ Well, it seems that with some Irish newspapers you can judge a book by its cover and that we don’t need any detail or political depth when it comes to election coverage.
As the local and EU election campaigns enter their final week, An Phoblacht provides an in-depth analysis of the seven daily morning newspapers published in the 26 Counties, looking at how they covered the election campaign from Monday 25 May to Saturday 30 May.
The findings show a newspaper sector more focused on the trivial and the cosmetic than the factual, the policies or the actual ongoing debates in homes, workplaces and local communities, emphasising the need to get out and vote on 5 June and make real change happen by giving Sinn Féin your vote.

Newspapers play a key role in any community as a platform for reporting news, promoting political debate and comment. In the 26 Counties, surveys commissioned by the National Newspapers of Ireland organisation show a daily adult readership of newspapers at 87%, meaning that nearly nine out of ten people read a paper very day.
The tone that newspapers set in terms of discussing national and local politics is even more important in the context that there are growing numbers of floating voters in the Irish electorate
The Irish National Election Study, an ongoing five-year study into electoral behaviour run from Trinity College Dublin has shown that at least a third of voters are ‘floaters’ and changed their political affiliation between 2002 and 2007.
A second example of this growing voter volatility was shown in last weekend’s Irish Times/ TNS mrbi poll, where 19% of voters have still to make up their mind on who to vote for.
These factors put the print media in a very important place when it comes to profiling political issues, parties and candidates. So how did the Irish morning papers perform last week?

The Irish Times
The Times ran 89 election articles last week. Of the total, just under 30 were snippets from front-page flashes promoting inside articles or part of their daily “ballot beat”, a light-hearted, occasionally cutting and sarcastic overview of the elections’ more quirky aspects.
During the week, Sinn Féin is mentioned in the headlines of five articles, four of the headlines appearing all on one day (Tuesday 26 May), as the party launched its EU manifesto.
The Times ran a profile of Toiréasa Ferris the same day with the headline “More Armani than armalite as Ferris turns on the charm.” Tuesday was also one of the few days during the week where the paper ran a photo of Sinn Féin candidates.
Sinn Féin is mentioned in other articles during the week, particularly in constituency profiles, of which the Times carried at least two daily. The other headline particularly focused on Sinn Féin is the allegation by an electoral opponent that party members were involved in an attack on her car. This story got more coverage during the week than Sinn Féin’s manifesto launch or any of the party’s campaign events.
When it comes to the other parties, Fianna Fáil got 24 mentions, compared to 28 for Fine Gael, 16 for Labour and 6 for the Greens. We left it out of the detailed poll analysis except for the front-page coverage last Friday and Saturday as the poll analysis covers all the parties.
The Times was also one of the few papers to cover elections in the North.

The Irish Independent
The Independent ran 72 election-related articles. Sinn Féin appeared in five of them where the party was in a headline. All were negative and raised issues such as North West EU candidate Pádraig Mac Lochlainn running for the locals, something not noted during the week about Fianna Fáil’s Eibhlin Byrne, Labour’s Ivana Bacik or the Greens’ Deirdre De Burca, who would all have to give up one form of elected representation if they succeed in the elections this week
Fianna Fáil got 22 headlines and, to be fair, many were negative. But, unlike the Sinn Féin coverage, the Independent actually covered quotes from party leaders and spokespersons in the headlines, so readers could get instant access to what the Fianna Fáil message was.
Fine Gael got 24 mentions with again quotes from Enda Kenny and other spokespersons carried in the headlines along with a lot of pictures.
The Labour Party got 16 headlines or prominent mentions while the Greens got six.
The Independent, like the Times, has a daily snippet section. Theirs is called “Floating Voter” and this had over 20 articles of the paper’s total during the week.

The Irish Examiner
The Irish Examiner had the most election coverage during the week with 100 articles. Less negative towards Sinn Féin than the Independent, the paper still gave little coverage to Sinn Féin, with three pictures during the week and four headlines with Sinn Féin mentioned in nine articles, mostly constituency profiles, but again no actual quoting of a positive Sinn Féin policy position, and just one headline quoting Gerry Adams responding to Eoin Ryan’s criticism of Mary Lou McDonald.
Thirty-eight articles had Fianna Fáil in the headline or prominently mentioned compared to 24 for Fine Gael, 15 for Labour and 9 for the Greens. Green proposals on noisy neighbours, controlling property developers in planning and promoting cycling routes all gained media coverage, unlike Sinn Féin proposals and statements during the week.

Irish Daily Mail
Is this a first – 28 articles and no mention of Sinn Féin? Ten prominent mentions for Fine Gael, 12 for Fianna Fáil, 3 for Labour and 4 for the Greens, though a lot of these were negative as the paper attacked the cycling press conference organised by the party around the streets of Dublin on 25 May, reported on across nearly all papers on the 26th but described in a Mail editorial as “Green Tomfoolery”.

Irish Daily Star
The Star had 24 election-related articles. Sinn Féin got mentioned three times, none in a positive way, none that mentioned party policies or proposals. Eleven articles were about Fianna Fáil, many of them negative but again following a trend of reporting on party leader and spokesperson quotes.
Five articles highlighted Fine Gael, four for Labour and one for the Greens, which included three pictures of Deirdre De Burca’s campaign bus, which was involved in an accident on 25 May.

The Irish Sun
Fifteen articles was the total of the Sun’s electoral coverage. On one day (28 May), there were no election-related articles and, like the Mail, had no mention of Sinn Féin, but the Labour Party and the Greens were also overlooked as this election coverage was dominated by articles about Fine Gael and Fianna Fáil.

Irish Daily Mirror
The Mirror had 18 articles across the week, seven on Saturday 30 May.
The only coverage given to the Greens was their cycling press conference while the only prominent mention for Sinn Féin was back to the alleged attack on a candidate’s car.

The dominant themes of the week
If there was one politician who dominated media coverage last week it was Labour’s EU candidate for the South constituency, Alan Kelly.
On 27 May, Kelly gets two mentions in The Irish Times. On page 10, there is a picture of Alan and a short article about his campaign rap song. On the same day, in an article on EU voter turn-out on page 13, the paper runs a picture of Alan Kelly. The same day sees the Irish Independent profile Kelly’s song, as does the Irish Examiner, showing a picture of Kelly with Irish rugby former international Peter Clohessy. The Daily Star also weighs in for Kelly on the 27th with an article and picture.
The Irish Times returns to the Kelly video on 28 May to tell us that fellow Labour Party candidate Alex White also has a YouTube video, not a rap but a music-backed monologue in the vein of Bob Dylan’s Subterranean Homesick Blues.
The Independent returns again on the 28th with an even bigger article and picture of Kelly profiling his rap song. The Daily Mail have an article on Kelly on the 28th, as does the Irish Star with a large picture, with the Mirror bringing up the rear with an article on the campaign rap song.
That mounts up to ten mentions for one candidate on single figures in election polls for the South constituency.
Another Labour candidate who gets profiled across newspapers, broadsheet and tabloid, is South East Inner City candidate Maria Parodi. Boylesports, the betting company held an online poll to find “Ireland’s sexiest female candidate”.
Maria, contesting a seat in Dublin’s South East Inner City electoral ward, was voted winner with Fianna Fáil’s Sarah Ryan voted the second sexiest candidate; Sinn Féin’s Toiréasa Ferris was third.
A separate survey on male candidates placed Fine Gael’s Kildare County Council candidate Martin Heydon as the “sexiest” man running in local elections. The net result of all this poll sexism was that online gambling firm Boylesports got more coverage during the election week than some of the parties running in the election.
However, the lack of depth in election coverage does not end there. Pat Rabbitte’s birthday cake merits a picture in the Irish Independent on Tuesday 26 May, as well as the Daily Mail who, along with the Sun, had shown pictures of Enda Kenny and Brian Cowen sitting side by side at an Offaly v Kildare GAA match Sunday 24 May.
Dublin Fine Gael TD Leo Varadkar gets prominent pictorial coverage during the week after a pigeon defecated on his shoulder during a party walkabout. The Independent reported it on 27 May, while the Mail decided to give the story nearly half a page of coverage with three pictures of the incident.
Another Fine Gael candidate covered widely across the media was Emma Kiernan after a picture on the web of her play-acting with female friends was reported on across many papers, but it just confirms a wider trend of print media reporting focusing on the sexual and trivial first, politics second.
Another example of the trivial was coverage given to Fianna Fáil Lord Mayor and Dublin EU candidate Eibhlin Byrne. Byrne got considerable media coverage during the week for two reasons. First, that one of her children attends the fee-paying Alexandra College. Secondly, a video of the Byrne family dog on YouTube got considerable media coverage last week.
The Alexandra College connection fuelled media coverage after a student was expelled because of her parents’ failure to keep up with fees. Byrne told reporters that she was seeking a meeting with school management while former Alexandra College student and Dublin Central by-election candidate Ivana Bacik was reported as describing the school’s actions as “unjustifiable”.
The mayoral dog, Sam, has recorded a video, now on YouTube, with his musings on what’s gone wrong with Dublin, the economy and the end of the Celtic Tiger boom. Somehow it seems fitting that voice-overs for dogs promoting Fianna Fáil merit more coverage ahead of the party’s actual policy proposals. But is this really the most important story of the day? Ruff!