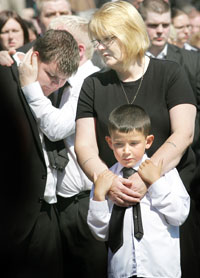 OVER a decade ago, in the aftermath of the sectarian murder of Portadown Catholic Robert Hamill, An Phoblacht pointed out that it takes more than a loyalist mob to lynch a man.
A mob can kill but it’s the reaction of others, the inaction of law enforcers, the compliance of the justice system, the acquiescence of political leaders that turns a brutal murder into a lynching.
Last month, with the mob murder of Coleraine Catholic Kevin McDaid, we witnessed another lynching. As in the murder of Hamill, the loyalists who killed McDaid did not hang him from the nearest tree. No, this was classic lynching  – Ulster, not Alabama, style.
Kevin McDaid, a 49-year-old plasterer by trade, was beaten to death by a 40-strong loyalist mob which drove into a Catholic enclave within the town on Sunday 24 May after Glasgow Rangers beat Celtic to a Scottish football title.
The mob knocked Kevin to the ground and beat him repeatedly about the head. Hamill had died within days, McDaid just a few minutes later. Another man beaten with McDaid, Damien Fleming, remains, over a week later, unconscious, critical and on life support.
But parallels with the Hamill murder don’t end there. Like the RUC before them, on the night of McDaid’s murder, Coleraine PSNI anticipated trouble.
•    In 1997, an armed RUC mobile patrol was parked close to where loyalist mobs routinely attacked Catholics making their way home.
•    In 2009, the PSNI in Coleraine had mobilised back-up units in the anticipation of trouble following a Rangers football match.
Like the RUC before them, the PSNI in Coleraine knew exactly the location of any potential loyalist attack. Last August, loyalists had mounted a similar incursion into the Heights area involving a 200-strong mob.
•    In 1997, a frantic relative who was walking home with her cousin, Robert Hamill, at the time of the attack, banged on the RUC Land Rover and pleaded for help. The RUC did nothing, emerging only after the brutal work of the mob had finished.
•    In Coleraine, despite repeated pleas for protection from nationalist residents fearing an imminent loyalist incursion, the PSNI failed to deploy any of their aptly named ‘stand-by’ units until after the fatal attack took place and the mob responsible had made their getaway.
In both cases, information concerning contact between members of the RUC/PSNI and loyalists later emerged. In the case of Robert Hamill, evidence of a telephone call from the home of an RUC officer to a loyalist suspect. It has been alleged that the RUC officer advised the suspect to destroy forensic evidence linking him to the murder.
We know that, on the same day as the McDaid murder, PSNI officers were in constant contact with loyalists threatening an incursion and even acted on behalf of loyalists demanding the removal of two flags in the nationalist estate.
It has now emerged that PSNI officers were chatting with loyalists in the Scotts Bar prior to the attack. It has also been alleged that PSNI officers were involved in goading loyalists about the presence of Irish Tricolours in the nationalist Heights area.

MESSAGE OF HATE
Meanwhile, as in the aftermath of the Portadown murder, hate crime continued following the murder of Kevin McDaid, specifically targeting the murder victim’s family.
Words of sectarian hatred were posted on a loyalist website as the remains of Kevin McDaid were brought home. The blog refers to a loyalist band parade held on the same night.
“Congrats! The McDaid family could hear you loud and clear as the coffin returned home. I think they and the world got your message. No Surrender! Hate is all we have left!!!”
A number of hate messages were posted on a webpage dedicated to the loyalist Pride of the Bann flute band. The band had refused to cancel a parade which brought 2,000 loyalist supporters onto the streets of Coleraine just days after the sectarian murder. A number of unionist politicians publicly supported the band’s decision to march. In the words of a local DUP politician: “Life must go on.”
A message posted on the same website just prior to the parade urged the loyalist band to play “loud so they can hear you over the river”, a reference to the nationalist area where the family of the murdered man live.
Since the murder, the McDaid family and other witnesses have been subjected to further sectarian intimidation. A day after the killing Ryan McDaid spoke publicly about the death of his father.
Within 24 hours, the PSNI arrived to issue the standard official warning of a loyalist death threat against Ryan’s life. The PSNI said loyalist paramilitaries were planning “some kind of action” against him.
“They killed my father, now I get a death threat and it looks like they want to kill me, but they’ve taken my father and they can do no more to me now,” said Ryan.
Local Sinn Féin Councillor Billy Leonard said only “the sickest of the sick” would subject a family that was “already going through hell” to more trauma.
Loyalists are also attempting to intimidate other key witnesses to the McDaid murder and the attempted murder of Damien Fleming, who remains critical on life support and unconscious a week after the brutal attack.

CHARGES
Last week, nine men appeared in court facing a number of charges in relation to the loyalist attack.
Six were charged with the McDaid murder. Some were also charged with the attempted murder of Damien Fleming and assaulting others. One man was charged with causing an affray. Two 15-year-olds have been questioned and a 33-year-old released on bail “pending further inquiries”.
Amongst those charged with murder was Pride of the Bann band member 50-year-old John McGrath. Another man being questioned in connection with the murder, Frank Daly, was a member of the UDA-linked Ulster Democratic Party, a forerunner to the Ulster Political Research Group.
In court, the McDaid family had to be placed under armed guard when over 80 loyalist supporters as well as family members of the accused attended a hearing in which all nine were remanded in custody after pleading not guilty to all charges. Loyalists attending Ballymena Magistrate’s Court obscured their faces with hoodies and scarves.
Despite mounting evidence to the contrary, the involvement of the UDA has been repeatedly denied by the PSNI. Last week, that denial was reiterated by British minister Paul Goggins, who claimed there was no evidence to suggest paramilitary involvement.
Of course, if the PSNI had been aware of an UDA connection to threats made prior to the loyalist incursion, their failure to take timely action is even more serious. The actions of the PSNI are already the subject of an investigation by the Ombudsman following a formal complaint by the McDaid family.
The funeral of Kevin McDaid took place on Monday 1 June. No unionist politicians attended – neither the MP for the area, DUP MLA Gregory Campbell, nor any of the other three unionist MLAs for East Derry. It takes more than a sectarian mob to lynch a man.

Kevin McDaid was a peacemaker – McGuinness

SPEAKING on Monday after the funeral of Kevin McDaid, who was  was beaten to death by a loyalist mob in Coleraine on Sunday, 24 May the North’s deputy First Minister, Martin McGuinness said:
“I want to commend the courageous and dignified manner with which the McDaid family, and particularly Evelyn McDaid and her sons, have conducted themselves throughout the course of what must have been an extremely difficult and heart breaking time. The loss of a husband and a father will change their lives immensely.
“Kevin’s loss to the community will also be deeply felt. Kevin McDaid was a peacemaker; a contributor, a positive and constructive influence interested only in improving the lives of his neighbours and the community.
“Those within our community who espouse bigotry and sectarianism are the enemies of the people; they are the enemies of progress and peace. They must be defeated. But in my view they will only be defeated when those in influential positions of political leadership use their undoubted influence by joining in a united approach to rid our society of what is a great evil, the evil of sectarianism.
“I can come to no other conclusion than that there is a serious failure of real political leadership in the Coleraine area. The people of Coleraine deserve better. I believe that we all know what is required. It is essential that the tragic murder of Kevin McDaid is a catalyst to bring all those with influence together in a united campaign against sectarianism. Government, political leaders, the statutory sector, Unions, the churches, the community and voluntary sector, supported by all those of good will must lead the way.”