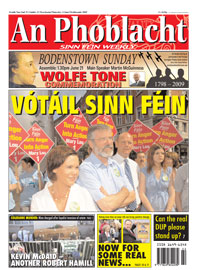 People need to ‘turn their anger into action’, says Adams

SINN FÉIN’S vote in the 26 Counties will rise significantly if people turn their anger into action and get out and elect the party’s representatives in and Fianna Fáil out. Speaking at the final press conference of the election campaign in Dublin on Wednesday, Party President Gerry Adams said Sinn Féin could emerge from elections North and South with four MEPs and a new TD in Dublin Central, if people use their vote for change.
Along with Bairbre de Brún in the Six Counties, Mary Lou McDonald in Dublin, Pádraig Mac Lochlainn in the North & West and Toiréasa Ferris in South are hotly tipped to take seats for the party, with Christy Burke running neck and neck with Fine Gael in the Dublin Central by-election.
Gerry Adams said the party’s goal of taking the seat off Fianna Fáil could be achieved by Mary Lou McDonald, but that it was over to the voters and every single vote was needed to get her elected. He added that the party’s vote would increase significantly in the council elections and in the East EU and Dublin South by-election constituency.
“Our message to the voters is simple – we will defend Ireland’s interests in Europe, not Europe’s interests ahead in Ireland,” he said.
“That is what we did with the Lisbon campaign when we proved a better deal was possible.
“We will stand up for local communities.
“A vote for Fianna Fáil in this election will be an endorsement of all that they have done to this state. A non-vote is also an endorsement of Fianna Fáil’s policies.
“Friday is the voters’ day – the day that they will have their say on Fianna Fáil and the economy. People need to turn their anger into action. If people want a party that will stand up for Ireland, that will stand up for ordinary people and ordinary communities, then they should vote for Sinn Féin. Staying at home is not an option.”