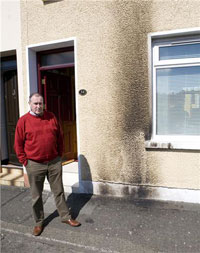 Mitchel outside his scorch damaged home, this was the third attack on his home in the past month

“COWARDLY SCUM” was how Sinn Féin MLA Mitchel McLaughlin described those responsible for a petrol bomb attack on his family home in Derry’s Bogside during the early hours of Monday morning.
The attack follows a bomb scare at Sinn Féin’s Sevastapol Street offices in Belfast the previous Friday.
Two petrol bombs were thrown at McLaughlin’s home in Blucher Street just after 1am. One exploded, causing scorch damage to the front wall. A third device was found partially exploded beside Mitchel McLaughlin’s car, which was parked in a car park across the street from his home.
The attack was the third on McLaughlin’s home in the past month in the wake of veiled threats issued by a spokesperson for an anti-Sinn Féin micro group at Easter in Derry.
Speaking to An Phoblacht, Mitchel McLaughlin described the attack on his home while his wife and son slept in their beds upstairs as “attempted murder” and said those responsible were “cowardly scum”.
“We know there is a definite threat from people who describe themselves as republicans and I do make a direct link between the rhetoric of those people who belong to micro-groups who oppose Sinn Féin and their supporters and the people behind this,” McLaughlin said.
“I call on these people to contact me. I’m not going to hide and I’m not hard to find. If they have the guts and the courage of their convictions let them come and talk to me.”

SOLIDARITY
A large number of people from across Derry gathered outside the McLaughlin home on Monday night in a show of solidarity with the Sinn Féin member and his family.
Condemning the attack, Mitchel McLauglin’s party colleague and the North’s joint First Minister, Martin McGuinness, said he believes the attackers come from the Bogside.
“I believe these people come from the Bogside area, they live in the community and they are the people who have been writing slogans on walls in support of so-called ‘dissident republican’ organisations.”
The Sinn Féin leader also challenged Gary Donnelly as a representative of the organisation that facilitated the event at which threats against the Sinn Féin leadership were made in Derry City Cemetery on Easter Sunday to publicly condemn the attacks on the home of Mitchel McLaughlin and his family.
McGuinness said:
“Whether the individuals who carried out the attack on the McLaughlin home acted unilaterally or in concert with any particular group, the 32-County Sovereignty Movement who organised the event in Derry City Cemetery on Easter Monday at which clear threats were directed at the Sinn Féin leadership cannot absolve themselves from the actions of those that are encouraged by these comments.
“I therefore call on Gary Donnelly as a member of the 32CSM to explain that organisation’s role in setting the stage for these attacks and how they see these actions as contributing to achieving Irish unification.
“Those who are opposed to the Sinn Féin political project and strategy had the opportunity to oppose us in the European elections but chose not to do so because they know that the vast majority of the Irish people agree with the Sinn Féin strategy.
“It is obvious that those responsible for carrying out these attacks and those in organisations such as the 32CSM who set the context for them are more opposed to Sinn Féin than British Government interference in Ireland.”
Despite being organised at quick notice a crowd of around 200 people including neighbours, Sinn Féin activists and members of other political parties turned out for the solidarity rally at the Mclaughlin home.
Sinn Féin MLA Raymond McCartney introduced Martin McGuinness who spoke of the ordeal that Mitchel, his wife Mary Lou and son Niall had been put through. Outlining Mitchel’s immmense contribution to the Republican struggle Martin McGuinness stated,
“Mitchel had the opportunity to earn a fortune and travel the world in his work capacity but instead gave it up to serve the republican cause.  A public representative of over 25 years Mitchel has operated an open door policy to everyone in our community and the turnout here tonight highlights the esteem in which he and his family are held by the local community.”  McGuinness said that the people behind the attack do not represent republicanism or the community.
“Mitchel and his family have stood against the worst repression by the British Army and the RUC and this attack will not distract him from continuing his role in the republican struggle”, he added.
Mitchel finished up by thanking people especially his immediate neighbours who have rallied around his family over the past few weeks during this spate of attacks

series of attacks
The petrol-bomb attack on Mitchel McLaughlin’s is the latest in a series of attacks that have been blamed on so-called ‘republican dissidents’ in Derry.
Joint First Minister Martin McGuinness has been warned by the PSNI that he is under threat from one of the micro groups. It also emerged that Martin McGuinness’s wife and members of his family were subjected to abuse while insulting and threatening graffiti have been scrawled on nearby walls.
Sinn Féin’s office in the Rathmore Complex has also been petrol bombed at least twice since the thinly-veiled Easter threat was issued.
Other attacks that have been carried out across the North saw the Rasharkin home of North Antrim Assembly member Daithí McKay targeted, while throughout Belfast Sinn Féin party offices have been paint-bombed and daubed with graffiti.
Just three weeks ago, Connolly House on the Andersonstown Road was paint-bombed and a memorial plaque, honouring the men and women of the IRA’s 1st Battalion, including Hunger Strikers Joe McDonnell and Kieran Doherty, was smashed.
In a more sinister twist, party offices in the Lower Falls were at the centre of a bomb scare as recently as last Friday, 8 May. British Army bomb experts blew up a suspect device found at the front door of the building, causing some minor damage.

Mitchel McLaughlin, with party comrades, Martin McGuinness and Raymond McCartney, addresses the crowd outside his home on Monday night