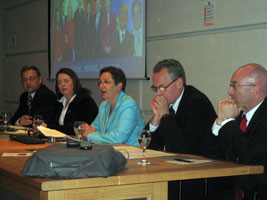 Eyes on the prize of unity and freedom

Public meetings continued across the North over the past week on as part of Sinn Féin’s programme promoting a ‘National Conversation for a United Ireland’. Addressed by representatives of the Sinn Féin leadership, the Sinn Féin Assembly and Executive teams, its Leinster House and European teams and local government representatives, the public meetings have provided an opportunity for discussion with members of the public on the key republican objective and on other matters of public concern.

Enniskillen
In her remarks to Sinn Féin’s annual public meeting in Enniskillen on Friday, 24 April,  Bairbre de Brún MEP spoke of the party’s commitment to the current political process in spite of the challenges faced by all. The MEP referred to her own work in Europe as an example of how the new political arrangements offered real benefits for all the people in the North, not least the people of Fermanagh. De Brún said:
“We all have a responsibility to show that the political structures we now have provide the means for genuine political progress. In my role as MEP, I am working successfully with political leaders from all parties, and working closely with political leaders in the South. In the modern world social and economic progress is only possible through co-ordinated effort and inter-regional planning.”
Also present at the annual meeting which attracted a large number of people from across the county, were Agriculture Minister and Fermanagh-South Tyrone MP Michelle Gildernew and Gerry Kelly MLA. Gildernew said the meetings are “part of Sinn Féin’s on-going commitment to consult with the people at every stage of the peace process and to do so regularly”.

KEADY
Newry and Armagh MP Conor Murphy told a public meeting in Keady, County Armagh to keep focused on the ultimate prize for Irish republicans – freedom and unity. The Sinn Féin Regional Development Minister addressed a 250 strong crowd. Also speaking at the event was Junior Minister Gerry Kelly MLA and Bairbre de Brún MEP.
Speaking after the meeting Murphy:
“Democracy requires the active participation of citizens and demands that we go out and engage directly with local communities. These meetings underline our commitment to a future based on a democracy of the people, by the people and for the people.
“Sinn Féin is the only Party in Ireland to engage with the public in this manner.
After the introduction of the panel by local Assembly member Cathal Boylan, Gerry Kelly gave an update on how Sinn Féin is advancing the republican struggle across Ireland. Bairbre de Brún outlined the work of Sinn Féin in Europe.
The meeting was then opened to the floor for questions from the public.
Questions from the public included subjects such as tax-raising powers in the Assembly, transfer of policing and justice to the North, how the EU works for the rights of the disabled, and rural development grants.
Comments from the floor also noted how far unionism had moved on in recent years, with one speaker stating that the DUP who had been set up to oppose civil rights and ‘smash Sinn Féin’ are now working with republicans daily in an assembly based on power sharing and equality.
Conor Murphy then closed the event by calling on the public to “keep your eye focused on the ultimate prize for Irish republicans – freedom and unity.
“Irish republicans are constantly building momentum to move us closer to our republican objectives. There are more republicans on this island now than there have been in 90 years. It is our duty as republicans to keep building upon this momentum until we achieve our ultimate goal of the Irish Republic.”