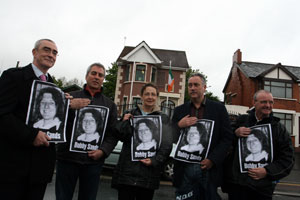 SINN FÉIN marked the 28th anniversary of the death of republican Hunger Strike leader and Fermanagh/South Tyrone MP Bobby Sands on 5 May with a number of events in Belfast and a vigil at the GPO in Dublin.
Speaking at a remembrance vigil in west Belfast, Six-County MEP Bairbre de Brún said:
“The conditions which led to the Hunger Strikes were created when the British Government tried to criminalise Irish republicans. But the republican prisoners – young women in Armagh Jail and young men in the H-Blocks – bravely took on the might of the British state.
“Like many republicans, I first became actively involved in politics through the H-Block and Armagh campaign of the late 1970s and early 1980s. The prison protest and the Hunger Strikes were a hugely emotive time in Irish history and, like many others, I felt I had to do something to make a difference and to make my voice heard.”
She said that the legacy of 1981 Hunger Strikers is still unfolding.
“Bobby Sands once said, ‘Everyone, republican or otherwise, has their own particular part to play. No part is too great or too small; no one is too old or too young to do something.’
“Bobby Sands and his nine comrades who gave their lives in 1981 were ordinary men in extraordinary times. Progressive movements across the world have for nearly three decades taken their inspiration from this time in Irish republican history.”

DUBLIN
Sinn Féin also held a vigil in Dublin outside the GPO at lunchtime on Tuesday.
South County Dublin Sinn Féin Councillor Sean Crowe, who was the National Organiser of Youth Against H-Blocks in 1981, led the Dublin event.
Crowe released ten doves in remembrance of the ten hunger strikers at the GPO. Speaking at the event, he said:
“Twenty-eight years ago, while the Establishment sat in silence, Dublin city centre came to a standstill as people learned of Bobby Sands’s death. Thousands of Dubliners stopped work, young people walked out of school, many businesses closed, and tens of thousands took to the streets.
“The politics of 1981 continues to inspire and influence republicans in our pursuit of a just and united Ireland. It reminds us of how far we have come and where we have yet to go.”