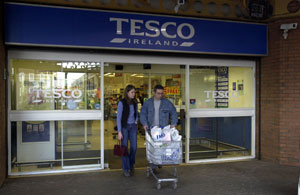 ONLY days after the temporary suspension of strike action in one of Tesco’s outlets when workers in Cork objected to management changes in working conditions substantially cutting their wage packets, Tesco Ireland is back in the headlines this week. The startling news is that, despite €3.15 billion revenue coming out of the 26 Counties last year, the firm is set to reduce the number of Irish goods on its shelves in coming weeks in what industry representatives described as “a black day for the Irish food industry”.
Last weekend, Tesco temporarily closed 11 outlets in border counties and one in Cork in a stock restructuring exercise that cuts the number of Irish brands on Tesco shelves despite it being the largest grocery retailer in Ireland with a 25.7 per cent market share, according to the latest TNS World panel retail survey.
The restocking plan will be rolled out across Tesco’s 116 26-County stores, mirroring a trend already apparent in Dunnes, Lidl and Aldi in the South as well as the ASDA and Sainsbury outlets north of the border, meaning the average Irish shopper will find it harder to actually buy Irish despite a thriving profitable retail grocery sector on the island.
Tesco opened a central distribution centre in Donabate, near Dublin, last year. It was designed, they said, to centralise the distribution of international brands throughout its stores. Now under a guise of offering lower prices, Irish grocery firms are set to be squeezed even further by the international retail giant.
Tesco Ireland CEO Tony Keohane has admitted that “Irish suppliers will have to respond to internationally-sourced products”. This year, Tesco expects to spend €650 million on Irish goods, which is a small share of its €3 billion budget.
In recent weeks, it has been criticised by the Irish Farmers’ Association. IFA President Padraig Walshe claimed staple foods were being sold as ‘loss leaders’ by Tesco. Tesco has said that sales of core grocery, meat, fish and bakery products rose in Ireland last year, yet because of low margins on these goods Irish producers are being squeezed to make more profits on international brands for Tesco, all made possible by the 2008 decision by the Irish Government to allow below-cost selling.
Paul Kelly, director of Food and Drink Industry Ireland, the representative group for food and drink manufacturers here, described the Tesco strategy as “a black day for the Irish food industry”, adding, “We are very concerned at the implications this will have for the availability and range of a lot of well-loved Irish brands.”

4 per cent...Percentage of 26-County grocery market that has moved to Six-County shops

€650 million...How much Tesco Ireland will spend on Irish goods this year