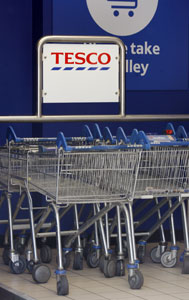 CHILDREN were told to change their sports jerseys by a manager at Tesco in Antrim Town during a fund-raising back-pack.
The chair of St Comgall’s GAC, Tom Crilly, said the children, all under 12 years of age, had been initially told by Tesco to wear their club kit to take part in a charity bag-pack, just like all other bag-packing teams.
The club shirts are plain green with black sleeves and a small club badge embroidered at one side. But the mere sight of children wearing a GAA top prompted “very vociferous complaints” from customers, Tesco said.
Declan Callan, the father of two nine-year-old twin daughters in the GAA club, told the BBC that when they arrived to join the event they were told they had to go home and change.
“The girls were a bit upset and couldn’t understand the whole concept of somebody having an issue with the GAA.
“Nearly every weekend there’s a club bag-packing there – Scouts, basketball, football and rugby teams – and they’re always in their club regalia.”
Tesco say they are looking into how they handled the incident and how they run bag-packing.
An Phoblacht
44 Parnell Sq.
Dublin 1
Ireland