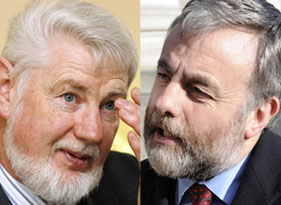 SOCIAL partnership talks in the 26 Counties aimed at reaching agreement on an economic rescue plan have ended in failure.
ICTU General Secretary expressed his frustration at the Government’s attitude in media interviews after a meeting if the ICTU Executive Council on Tuesday afternoon. Talking to the Government, the trade union leader said, is like “playing handball against a haystack”.
Earlier, SIPTU General President Jack O’Connor confirmed to the ICTU that an agreement could not be reached on the issue in which employers’ body IBEC wants the trade unions to accept that the pay agreement signed up to by social partners last September be disregarded and for there to be a pay freeze for the next few years.
The trade unions view the employers’ calls as “unrealistic” and the unions have sought various commitments from the Government, including a social solidarity pact, a €1 billion support package for vulnerable workplaces, concrete guarantees for people who paid into pension schemes, and support for those at risk of losing their homes as a result of becoming unemployed.
Jack O’Connor further added that the current cutbacks and increases in tax would merely lead to a deflationary spiral.