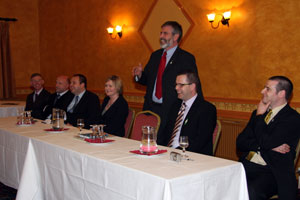 SINN FÉIN President Gerry Adams was in east Galway, Sligo and Mayo last week where he met local people and launched the campaigns of Sinn Féin local election candidates in the western counties.
As he completed his two-day tour, Adams said that the current economic crisis is directly attributable to government policy.
He said the scale of the recession as revealed in the latest quarterly economic report by the ESRI and Live Register figures from the Central Statistics Office underlined the Government’s failure in addressing the crisis. He said a change in political direction is needed.
“The economy has gone from boom to bust in what seems like the blink of an eye.
“The policies of the present and previous Fianna Fáil-led administrations are directly responsible for this catastrophe.
“In previous times of economic difficulty, the counties of the West of Ireland were asked to pay the heaviest price and were decimated by emigration and depopulation.  The Government never – not even during the boom – focused on creating employment in the West.
“What the latest information clearly indicates is that this government is incapable of sorting out the economic crisis. But we have choices.
“There can be an egalitarian alternative to the politics of greed, inefficiency, waste and corruption. These have been the hallmarks of governments in this country for far too long. Ireland needs a progressive movement for change. The time is right for a new alliance of all people and parties that want real and fundamental change.
“For Ireland’s sake, it’s time for this government to go.”

BALLINASLOE
The previous day, in Ballinasloe, County Galway, Adams was joined by North and West EU candidate Cllr Pádraig Mac Lochlainn and local election candidates Grainne Morahan, Cllr Jason Devlin, Cllr Dermot Donnelly and Eoghan McCormack as he launched the party’s EU and local government election campaign.
The party president also met a number of local health groups, including some dealing with addiction issues. Speaking during his visit, the Sinn Féin leader called for the retention and expansion of services at Portiuncula Hospital.
Adams said the Government’s drive, under Health Minister Mary Harney’s watch, to privatise and centralise hospital services is having a devastating effect on the delivery of essential local services and lives are being put at risk.
One example of this is the closure of the residential drug and alcohol addiction unit, which the HSE closed several years ago with disastrous human consequences.