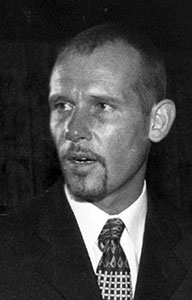 THERE was “systematic failure” by Special Branch to warn people in the past that their lives were in danger, a member of the Stevens Inquiry team has testified.
Former RUC Detective Chief Inspector Vincent McFadden was giving evidence last week to the Billy Wright Inquiry. The inquiry is examining the assassination of the Loyalist Volunteer Force leader by INLA prisoners in Long Kesh in 1997.
McFadden told the hearing that he had evidence that RUC Special Branch had failed to warn 255 individuals that their lives were at risk during a two-year period between 1989 to 1991. He said most of the individuals were from the Catholic community and some had “paramilitary links”. The hearing was told that some of those under threat were subsequently killed.
The Stevens team investigated allegations of state collusion with unionist death squads. To date, the British Government has refused to publish the findings of the inquiry.
Over 400 people have been killed in circumstances where collusion has been suspected and hundreds more were targeted.
McFadden told the inquiry that the Stevens team had found no evidence that the 255 individuals had been warned by the RUC. The witness, who was also a former chief superintendent in the RUC, said that he knew of instances where Special Branch had failed to act on specific intelligence in their possession.
He said there were documents which showed this to be true and these records are in his possession. McFadden also said that other state agencies, such as British Military Intelligence, had “sanitised” information passed between them to make detection more difficult.
McFadden said the British military knew the RUC was not acting on intelligence but did nothing to alter that fact. In some cases, agents informed their handlers of threats to an individual but no action was taken. McFadden described Special Branch and the British Army’s Force Research Unit as handling numerous agents.
Meanwhile, allegations continue to emerge in relation to the recent murder of financial adviser Geoff Kerr, who was shot dead at his Templepatrick home last week. According to media reports, a loyalist gang led by a British agent may have been involved in the killing.
An Phoblacht
44 Parnell Sq.
Dublin 1
Ireland