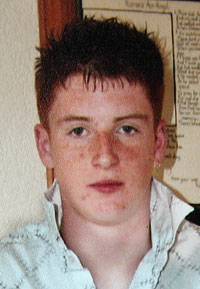 THE family of murdered Catholic schoolboy Michael McIlveen (15) in Ballymena has criticised the jail terms to be served by his killers. Speaking after the hearing, the McIlveen family said they were “deeply disappointed” by the sentences imposed by trial judge Treacy.
A murder conviction carries a mandatory life sentence but the tariffs set by the judge means that the men will be considered for release after serving a maximum of 13 years.
Michael’s sister, Jodie, said outside Antrim Crown Court:
“We feel the sentences imposed were too lenient. Michael lived for 15 years and not one of those convicted for his murder will serve this length of time in jail.”

BASEBALL BAT
Michael McIlveen was brutally beaten with a baseball bat by a sectarian gang in Ballymena in May 2006. He died hours later in hospital. One of those convicted fetched the baseball bat from his grandmother’s house to use in the attack.
The judge described the killing as “a brutal sectarian murder” but, despite this, awarded tariffs for those convicted ranging from 10 to 13 years after which they will be eligible for release.
Four young men – Aaron Wallace, Christopher Kerr and Mervyn Moon from Ballymena and Jeff Lewis of Rossdale – were convicted of the teenager’s murder earlier this year. Three others were also convicted on lesser charges of manslaughter and causing an affray.
An Phoblacht
44 Parnell Sq.
Dublin 1
Ireland