International May Day: Sinn Féin launches plan to save and create jobs 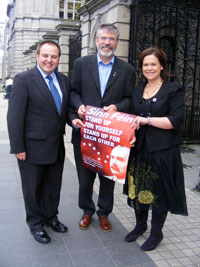 MAY DAY saw Sinn Féin President Gerry Adams and deputy leader Mary Lou McDonald MEP launch the party’s 10-point plan for supporting workers through the current recession.
Adams and McDonald were joined by Cllr Pádraig Mac Lochlainn, who served on the Irish National Organisation of the Unemployed (INOU) National Executive and is currently a board member of InterTrade Ireland.
Speaking at Leinster House, Mary Lou McDonald said:
“Irish workers are being forced to carry the can for the economic crisis. Fianna Fáil continues to punish working families and the low-paid for their mistakes. But the current crisis offers the people an opportunity – an opportunity to reshape this state.
“Fianna Fáil and the Greens have pursued a shameful tactic of divide and conquer, pitting the public sector against the private, the low-paid against social welfare recipients, in an effort to deflect attention from their own economic failure. This post-colonial style of governing by Fianna Fáil cannot continue to go unchallenged.
“Ireland needs to come out of this crisis with the necessary infrastructure, skills and public services that will put us at the top of competitiveness rankings and deliver prosperity and equality for all our people. Fianna Fáil has proved itself unable and unwilling to protect the ordinary people of this state. It’s time for them to go.
“Sinn Féin representatives have been meeting with chambers of commerce, employers’ groups, trade unions and communities throughout the country, putting forward our solutions to get Ireland back to work. Workers must be supported and job retention and creation promoted.
“Our proposals to support workers through the recession include a €300 million jobs retention fund to subsidise workers in struggling but viable SMEs. We want to increase the school leaving age to 17 and to introduce a scheme to get early-school-leavers back into education. Take those on or below the minimum wage back out of the tax net. And we need to get construction workers back to work by proceeding with the construction of key infrastructure projects, including the construction of 125 schools a year between 2010 and 2013.
“If we are to build a better future it is the skills and efforts of workers that will enable us to do so. With new leadership at the helm we can turn things around. Today, Sinn Féin is marking International May Day by launching a 10-point plan for supporting workers through the recession. My message to workers today is a straightforward one – Stand up for yourself, stand up for each other.”

1.     Establish a €300 million jobs retention fund to subsidise workers in small and medium enterprises (SMEs) struggling to keep their workers.
2.     Bring forward proposals for a ‘GI’ type of Bill for redundant workers and those signing on where they would have fees waived and keep social welfare beneﬁts while studying.
3.     Increase the school-leaving age to 17 and introduce a scheme to get early-school-leavers back into education.
4.     Increase the number of Community Employment schemes and places, make schemes more relevant for the needs of society and local government, and have all schemes ﬁt into FETAC and HETAVG awards schemes so students can progress to higher-level education qualiﬁcations.
5.     Introduce pension reform and start putting in place the framework for a new system based on a universal state pension that would be augmented by a Social Insurance earning-related pension.
6.     Ensure all those who lose their jobs are able to access their entitlements as speedily as possible. To do this, transfer additional staff from within the public service to process claims for unemployment assistance.
7.     Deal with the predicament of construction sector workers whose social welfare entitlements were undermined as a consequence of being coerced into becoming self-employed by their employers.
8.     Take those on or below the minimum wage back out of the tax net.
9.     Get construction workers back to work by proceeding with the construction of key infrastructure projects, including the construction of 125 schools a year between 2010 and 2013.
10.     Banks to be compelled to allow those on high-interest ﬁxed mortgages to move to tracker mortgages without facing penalties.