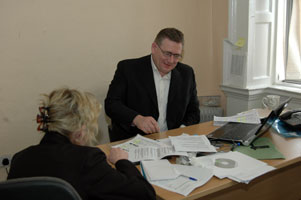 Get involved, somehow, some way

IN VIEW of the heightening election mode with party workers out on the hustings, I wasn’t surprised last week to find Sinn Féin headquarters practically evacuated, all but for one or two people beavering away at the outback of the building. One of these was Sinn Féin National Director of Elections Brian Tumilty, who I found bent over a desk, glued to a computer screen.
Brian Tumilty is a seasoned election campaigner. He took up his role 12 months ago.
“I’ve worked on elections on and off for the last ten years. 1996 in the Forum elections in the Newry/Armagh area – that’s where I would have got the grounding in. Over the years I’ve had plenty of experience, thankfully with more ups than downs in the last decade.”
While he’s not daunted by the challenge ahead, Brian points to the size of the project this time round. “We’re a 32-County party fighting elections throughout Ireland and part of that, of course, are the 26-County local elections. We’re putting up hundreds of candidates and we’re fighting the EU elections on a 32-County basis with six candidates in five constituencies.”
Sinn Féin’s strategy for these elections is more than about getting bums on seats, as Brian outlines.
“We’re being very realistic about the targets we’ve set ourselves and those targets aren’t just about getting people elected. This is about building the party and building the electoral capacity of Sinn Féin throughout the island. So while we’re out there fighting elections in the normal sense of things – doing all the work to get people elected and raising the republican profiles in the areas – we’re also about republicanising those areas.
“And we’re identifying new people to come forward and work with Sinn Féin into the future so there’s a recruitment aspect to the election campaigns.
“We have a national programme in that we’re contesting on a 32-County basis and we’re using the elections to advance the republican objective of a united Ireland while at the same time using the election campaigns to build the party.”

With the removal of the fourth EU seat in the capital the task for Sinn Féin in Dublin is big but Brian is impressed with the progress made there over the past year.
“We’re very, very realistic about what has happened in Dublin with the removal of the fourth seat. There is realism about the task ahead. We know that we have to almost double our first-preference vote to be in there fighting. So we know all of this and we’ve put in place the plans to deal with that. We have a publicity strategy. We’ve been rebuilding the party in Dublin. We’ve identified people who hadn’t been working in the party for a number of years and they’ve gotten re-enrolled. This was as a result of the work of the party in Dublin and the Organisational Development Unit. There’s been an input of resources and energy into the party in Dublin over the past 12 months.
“What can’t be left out of the Dublin equation is the quality of the candidate, Mary Lou. She’s a tremendous candidate and leads from the front. She is a leader. She’s the party vice-president. She’s never shirked on any of her responsibilities or in the various projects that have been put to her.”
Brian Tumilty is very impressed not just with the calibre but with the energy of all six EU candidates.
“We have a very strong team throughout the constituencies. The Sinn Féin team is the youngest and most energetic of any party going forward  for these EU elections.
“In the European elections, the campaigns are mainly fought within the constituency so the candidate has to be relevant to their constituency and be able to offer something to the electorate, and we’ve selected candidates who meet that requirement.”
While the departure of Fianna Fáil MEP Seán Ó Neachtain from the race in the North-West constituency is relevant to Pádraig Mac Lochlainn’s prospects, Tumilty warns against taking heed of media spin around anything to do with Sinn Féin’s election results.
“The fact that Seán Ó Neachtain pulled out does create a new dimension and we calibrate our approach to it with that in mind. It’s not going to be plain sailing but we’ve a plan based on our analysis of the vote  in the area and mainly based on the candidate and Pádraig is in with a good fighting chance.
“There is also the dynamic team around Pádraig with the likes of Pearse Doherty who’s running the political strategy around Pádraig’s campaign. Our campaign in North-West is not going to be based on what any other party is doing. Our campaign there is going to be based upon the strengths of the campaign team and the candidate.

“Candidates from other parties will come and go and the media will play up or play down the strengths or weaknesses of individual candidates.
“They will talk us up at a time when we’re not strong and they’ll talk us down at a time when we are strong so we’re not going to play the game of the media.”
And in the North?
“We would be quite confident about increasing our vote in the Six-County EU elections with Bairbre. But for that to happen people in the Six Counties need to come out to vote. They need to stand up and be counted.”
Then, of course, there’s the by-elections in Dublin Central and Dublin South. “So they’re also on our radar,” adds Tumilty.
The local council elections are a vital means of maintaining the development of the party nationally.
“In the local elections we’re standing roughly the same amount of candidates as in 2004 and what we expect to do is at least equal that this time around.
“The local elections are crucial in terms of our long-term development, giving local republicans a voice and building the party at the grassroots of communities. But where we don’t get people elected we’ll find a way of recruiting new people into the party. We’ll build cumainn in the various areas and organisation structures so that the party can build on those areas.”
Part of that building process, Tumilty says, is about being professional.
“Another thing about the elections is the process of professionalising our electioneering practices. We need to become ‘fitter for purpose’ – fitter for the job.”
The party needs to provide better services to the local organisation with regards to training, advice and the use of IT and internet systems as well as general election management, he says.
“The way we ran election campaigns 20 years ago won’t work now. On the policy level, if you have a message you want to get across that’s going to impact on our campaign – you have to have the appropriate policies and positions and then you have to come up with ways of getting your message out. You need to use the techniques that are out there today, including how we relate to the media and the use of advertising and publications. Most of our election teams are coming up with local newsletters and bulletins.
“We need to be constantly coming up with new ideas and that’s where the Internet comes in. We’re looking at the entire range of election tools that are out there.”

We say we put Ireland first and we deliver on that

So how does Brian think the recession will impact on the elections?
“The recession has obviously affected the electorate, North and South.
“In the 26 Counties, you have huge anger at the Government. Fianna Fáil is taking a hammering right across the country. Different elections demand different election messages and we need to adapt ourselves. In these recessionary times people’s mindsets are geared to the economy, the bankers and their mortgages – and who can blame them? – so there’s an apathy or disillusion out there.
“A huge section of people intend to stay at home. We’re estimating that anything from 40 per cent to 45 per cent of the electorate intend to stay at home. If people don’t come out to vote they don’t count. If you don’t vote you don’t count.”
Brian sees these elections as a chance for Sinn Féin to flag up its difference – an alternative to the mismanagement that has brought this country to its knees.
“We have to emphasise that we’re different than the rest. A significant aspect also is the fact that our political representatives, our party president, our MLAs, TDs and right through every strand of the party’s employees all earn the same wage – the average industrial wage.
“Now is a time when people’s backs are against the wall they can see that Sinn Féin is different than the rest. We’re prepared to make sacrifices for Ireland. Sinn Féin always puts Ireland first. That’s not even a slogan. We say we put Ireland first and we deliver on that.”
Brian is totally confident in Sinn Féin’s ability to deliver on any political level, particularly when it comes to the economy.
“In the general elections of 2007 the media were saying that Sinn Féin were economically illiterate; they’re now actually advocating the Sinn Féin policies from 2007! That’s in terms of higher taxation and the housing bubble and the unregulated greed economy. Sinn Féin was saying this from 2007 and Sinn Féin has resolutions to offer. Look at the recently-launched party document, Getting Ireland back to Work, outlining ways and means to create and maintain jobs.”
Listening to Tumilty gives you a distinct sense of a nationwide team in a hive of activity with a definite buzz about it.
“Since taking up this role I’ve been seeing more of Ireland than I’ve ever seen. I’ve been meeting republican activists the length and breadth of Ireland and that has actually buoyed me up and boosted my confidence. I’m impressed by the calibre of people I’m meeting and their dedication.
“Republicans throughout the country are joined in their minds in addressing the task on hands. There’s a big team out there – people like Gary Fleming, the Six-County Director of Elections, the Seán Hugheses and Ciaran Dohertys and, of course, Peter Ogle the 26-County Director of Elections – people of long-standing republican backgrounds. The whole experience of working on these election campaigns is energising.

In the general elections of 2007 the media were saying that Sinn Féin were economically illiterate; they’re now actually advocating the Sinn Féin policies from 2007!

“I was down in Kilkenny recently with 30 people who came down to do leafleting and Kathleen Funchion’s father remarked on the Newry people running around putting leaflets in doors. He says to me: ‘We’re used to people from down here going to Newry for shopping and here we have Newry folk coming down South to shop – for votes.’”
So there’s a big job of work overall and the Director of Elections appealed to people to get stuck in.
“I would appeal to the republican grassroots to come out to canvass - knock doors or talk to their friends, neighbours and work colleagues - do leafleting or whatever way they can. Just get involved in the campaign somehow, some way. There’s something everyone can do.”