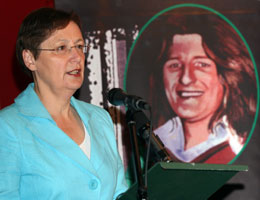 'When Bobby was knocking on doors in Twinbrook and agitating and organising on behalf of people, he was creating the template for the Sinn Féin activists of today'

YOUNG PEOPLE have been at the vanguard of the republican struggle since its inception so it is with great pride that I dedicate this year’s Bobby Sands Memorial Lecture to Na Fianna Éireann.
As a woman involved in politics myself, I would like to say a few words about their founder, Constance Markievicz – someone who continues to be an inspiration to me and to countless other republicans today. Here was a woman who came from a life of privilege yet dedicated herself to those less-well-off and to the cause of Ireland. Whether it was as second in command at St Stephen’s Green during the Easter Rising or providing food for workers’ families during the 1913 Dublin Lock-Out, she always led from the front.
Countess Markievicz saw that the shared history of Ireland was something that the Anglo-Irish of her class could also embrace.  She went beyond the norms of her day in other ways, embracing the interests of the less-powerful of that society, including organised labour and women of all social classes. Her politics transcended gender, just as they transcended class and creed. It is not surprising then that she also recognised the potential of young people to play an important role.
This year we mark the centenary of the Fianna’s creation by Constance Markievicz and Bulmer Hobson. They named this new organisation in honour of Fionn mac Cumhaill’s warrior poets of Irish folklore. The ancient Fianna were renowned not just for their skills as warriors but for their talents at poetry, the arts, their guile, and their love of humour and song. They were noble through their actions and deeds, not by birth or title.
It was certainly quite a legacy for the young people of Na Fianna Éireann to uphold in 1909. But uphold it they did. They played active and crucial roles throughout the subsequent century of struggle. They served in the Easter Rising, the Tan War, the Civil War and the most recent IRA campaign, and they conducted themselves with the kind of courage and commitment for which their legendary namesakes are famed in the annals of Irish mythology. Many of them lost their lives while countless others were to spend years in a prison cell.
Indeed, many of those at the forefront of the great national movements over the years were very young, very idealistic and, like those who have led the movement for change in more recent years, were motivated not by hatred or in the hope of personal gain but by the fact that they saw great wrongs around them and wanted to put them right. We need to recognise that this doesn’t just apply to past history. Young people can and do take on roles of responsibility in republican politics today and we need more young people to join in these tasks.

TODAY’S REPUBLICAN YOUTH
I want to pay tribute to that modern generation of young people. I am delighted to see so many of you here tonight. We see that same steadfastness, enthusiasm and commitment in the young people in Ógra Shinn Féin, in the Sinn Féin cumainn in the colleges, and not least in our local councillor Charlene O’Hara, who is a really good example of the bright, active and committed young Irish republicans we have today, and I salute you all.
Bobby Sands was just 19 when he first went to jail. At the age of 25, he was sentenced again. This time he would never taste freedom again. Like the Fianna of folklore and the Fianna of the past century, Bobby Sands and his comrades in Long Kesh and Armagh Jail were little more than children when they took on the might of their oppressor.
For five years they endured the horrors of the Blanket and No-Wash protests. They withstood the torture and degradation of a system which sought to crush the freedom struggle by brutalising naked and defenceless young men and women. But it was the system itself which would ultimately perish in the tombs of Long Kesh. Bobby Sands and his comrades may have lost their lives but their spirit lives on. It is here in this room. It is here in the hearts of the young people who are carrying on the struggle for which they died, in a new way befitting the new times which republicans have brought about.
By contrast, it is Britain’s attempts to demonise, criminalise and defeat our struggle that today lie buried in the rubble of Long Kesh.
The Sunday Times newspaper last month tried to call into question the republican leadership’s handling of the Hunger Strike with lurid, misleading headlines in the paper when it published British Government documents released under the Freedom of Information Act.
Yet when you read the British Government documents they published, these actually corroborate the account of what happened at the time by Brendan McFarlane, by the surviving Hunger Strikers, by Sinn Féin, and indeed by the Irish Commission for Justice and Peace.
There were negotiations, there was an offer (in fact a number of different offers) but as the British refused to sign anything or give a public commitment to move before the Hunger Strike ended there was no ‘deal’. Due to the way the British Government had acted in the wake of the first Hunger Strike it was inconceivable for the Hunger Strikers to end their fast without some form of public guarantee.
The timeline published by the Bobby Sands Trust also shows that the British Government refused to meet the Hunger Strikers and stand over their offer.
In song and poetry, in film, art and commemoration, the 1981 Hunger Strikers live on and continue to inspire new generations of Irish republicans. And what of Margaret Thatcher? Is she remembered for bravery and sacrifice? Is she remembered for her contribution to freedom and liberty? Does her memory inspire younger generations to work for a better world? I think not. She will be remembered for intransigence, brutality and a refusal to act honestly and honourably.
The Hunger Strike is already regarded as a watershed in our history and I have no doubt that, in the fullness of time, it will come to be seen as a pivotal point on our long march to freedom.
The struggle and the sacrifice of Bobby Sands and of his comrades continue to sustain republicans the length and breadth of Ireland today. What has changed is the context and the means by which that struggle is carried out.
Tá cosán síochánta agus daonlathach ann anois chun Éire a aontú. Tá an saol anseo in Éirinn athraithe mar gheall ar próiseas na síochána agus mar gheall ar sár-oibre Poblachtánaithe. Chruthaigh poblachtaigh na deiseanna seo trína bheith straitéiseach, dírithe agus trí araíonacht. Tá gá leis an fhócas céanna arís anois.

PATH TO A UNITED IRELAND
We have come a great distance. We have changed relationships on this island and changed them forever. We have opened up a peaceful and democratic path to a united Ireland. We have ended the old ways of the Orange state. There is no going back to the days of domination and discrimination.
I would appeal to young republicans not to be swayed by the rhetoric of micro-groups who seem intent on pursuing war for war’s sake. Armed struggle is not a philosophy or ideology in itself. It is a decision of last resort and something that can only be justified when there is no other avenue. It has to have a moral basis. It has to be understood and supported by huge numbers of those who are being oppressed.
That last point is one which Bobby Sands dealt directly with himself when reflecting on his life as an IRA Volunteer.
“The people stood by us,” he wrote. “The people not only opened the doors of their homes to lend us a hand but they opened their hearts to us. I learned that without the people we could not survive and I knew that I owed them everything.”
While I accept that there are some unionists and also some who would aspire to Irish unity who have difficulties with where we are, the reality is that the popular will is to move forward.  And the reality is that our struggle is the only struggle which is going to deliver Irish unity and freedom and I would urge everyone to get involved.
Again, as Bobby Sands said:
“Everyone, republican or otherwise, has their own particular part to play. No part is too great or too small; no one is too old or too young to do something.”
Táimid níos daingnithe ná riamh chun Poblacht na hÉireann a bhaint amach. Ní raibh muid riamh níos cóngaraí do lá na saoirse. Ach is iomaí dúshlán romhainn a mbeidh orainn tabhairt fúthu.
The union has been hollowed out and an increasingly confident nationalist and republican community are taking co-ownership of every aspect of political, civic and social life. But if we are ever to pay a truly fitting tribute to Bobby Sands, to the Fianna, and to all those who sacrificed so much for Irish freedom, then we have to build on that progress and complete the task at hand.

BOBBY SANDS – COMMUNITY ACTIVIST
Over the coming weeks, there are a number of elections that will soon be upon us  – European elections across this island and across Europe, and local government elections in the 26 Counties.  There are also a number of ongoing justice and equality campaigns. And, both here and abroad, Sinn Féin is building a vibrant and dynamic campaign for a united Ireland. The national dialogue that kick-starts that campaign has already begun.
So, as you take the campaign trail to the streets of our towns and the highways and byways of our countryside, take with you the message that the conditions for achieving a united Ireland are stronger now than they have been for generations.
I know that the daily grind of working and building within communities, of organising and campaigning, can all be challenging. At times, it may even be difficult to see how your efforts fit into the bigger picture.
But that’s not how Bobby Sands saw it. Bobby Sands understood better – and earlier – than most the critical importance of campaigning and working on behalf of people. After he was released from his first prison sentence, Bobby threw himself into community activism in Twinbrook, bringing to the task all his legendary energy and enthusiasm. When Bobby was knocking on doors in Twinbrook and agitating and organising on behalf of people, he was creating the template for the Sinn Féin activists of today.
So when you take to the campaign trail, when you apply yourself to the work of the struggle, always remember whose example you are following.