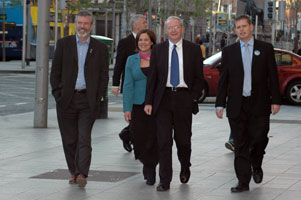 MARY LOU McDONALD’S bid to hold Sinn Féin’s European Parliament seat in Dublin was formally launched last week with 350 supporters crowding into the Gresham Hotel on O’Connell Street with Gerry Adams and Martin McGuinness to get the campaign off to a rousing start.
Setting the tone for the evening and the campaign ahead, Paul Donnelly, a sitting Fingal county councillor and local election candidate for Mulhuddart, opened the proceedings by saying:
“We are not in this to make cosmetic changes or just to change the faces.  We are not in this to tinker along the edges.  We are here to make a real difference – to make a real change in Dublin people’s lives.”

My message to the people of Dublin and beyond will be a straightforward one: If you want change, vote for change. Don’t let Fianna Fáil continue to punish you for their mistakes

Tomás Sharkey, Sinn Féin’s EU candidate for the East consitutency (what used to be the Leinster area), revved up the crowd with a customary rallying cry for the candidate’s hard work and efforts to be mirrored by republican supporters everywhere.
“This is the time to speak out for Ireland,” Tomás declared to rising applause. “This is the time to speak up for Ireland!”
In a brief intervention from the floor, Gerry Adams called for “a Hill 16 roar” for Mary Lou McDonald, to which the Dubs duly obliged. Invoking the memory of the 1981 by-election campaign in Fermanagh/South Tyrone which saw the historic election of Bobby Sands as MP, he recalled the hard graft it took to get Bobby elected.  He called on those gathered to “fight exactly the same way as we in Bobby Sands’s campaign did”.
Pointing to Mary Lou, Gerry Adams said, to another round of applause and cheers:
“There is no other political leader of the natural stature of Mary Lou McDonald.
“This evening needs to be the beginning of a five-week process to get this woman re-elected for the people of Dublin.”
The North’s joint First Minister, Martin McGuinness, said:
“This is an important election for us. We clearly have in Mary Lou the best candidate in the whole of Dublin fighting for an EU seat. We need to show the people of Dublin they have the chance to elect a champion. But we need to get out and inspire.”

Mary Lou took to the podium and pointed to the fact that “people are struggling with mortgages – people are struggling with tax – people are struggling on hospital waiting lists”.
Declaring that the Fianna Fáil/Green/PD Government is incompetent, she went further and said it is “a Government that doesn’t care.
“They are now asking the people to carry the can for their greed.  They are asking for understanding when they wallow in their own self-pity.”
The local elections, she said, are “a referendum on the Government. The people of this city need to send Government councillors packing – to sack them and to demand an apology for the damage they have done to this city.
“When they call to your door, ask them can they defend the indefensible – the cuts to the Christmas bonus, cervical cancer treatment, special needs education.”
On the EU campaign and the Lisbon Treaty, she said it has been her privilege to represent the capital city as a republican representative for almost five years and she wants to continue to hold that honour.
“No matter what the Government says, Ireland’s rejection of the Lisbon Treaty did not cause the economic meltdown.  No matter what the Government says, the Lisbon Treaty will not save Ireland from the economic meltdown.
“We need a new treaty. Sinn Féin will not accept bullying or bribery as a reason to accept a bad deal for Ireland.”
Mary Lou was as forthright and clear as ever in what she wants the message to be on the doorsteps to an electorate that is disillusioned with politicians because of the calamitous policies of the Fianna Fáil-led Government.
“My message to the people of Dublin and beyond will be a straightforward one: If you want change, vote for change. Don’t let Fianna Fáil continue to punish you for their mistakes.
“The people’s rejection of Lisbon gave the Government a strong mandate for a more democratic, equitable and peaceful European Union. Fianna Fáil and the Greens chose to ignore this mandate and instead kowtowed to their European cronies.

“The scale of the economic challenge facing Ireland and Europe demands a new approach to creating and sustaining jobs, protecting workers’ rights, investing in critical infrastructure and front line services and tackling poverty. Billions are being pumped into the financial sector yet it is ordinary people who are losing their jobs and their homes. Right now the focus of economic stability and growth has got to be on jobs. We need to get Ireland back to work. Sinn Féin has published a comprehensive jobs strategy that can address Ireland’s soaring unemployment.
“Fianna Fáil has no strategy for holding on to jobs or creating new ones. Their focus is solely on regressive cuts and tax hikes. This toxic government is attacking the lowest paid and those on social welfare whilst saddling us all with an unprecedented level of the bad property debt. SMEs cannot afford to do business yet Fianna Fáil is protecting property developers and banks at every turn.
“Irish politics can serve the people but only if it changes. Sinn Féin has the solutions. We are a party that is all about change that delivers for people. We are about a fair deal. Dublin cannot afford to keep [Fianna Fáil MEP] Eoin Ryan, and the country cannot afford Fianna Fáil.
“Stand up for yourself, stand up for one another. Vote Sinn Féin on June 5th.”