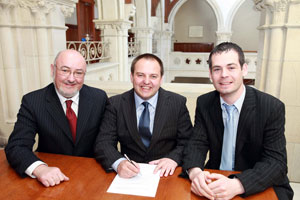 SIGNING UP FOR A FIGHT: Pádraig signs his nomination papers flanked by Caoimhghín Ó Caoláin TD and Senator Pearse Dohery

CLLR PÁDRAIG Mac LOCHLAINN handed in his nomination papers for the EU elections last Saturday in the  Court House in Sligo. He is the party’s candidate to represent the 11 counties in the North & West constituency.
The North & West EU constituency stretches from Loop Head in Clare to Malin Head in Donegal, from Carrickmacross in Monaghan to Belmullet in Mayo. It includes the Aran islands, Inishboffin, Achill islands, and Tory island, among others, as well as the Gaeltacht  areas of Galway, Mayo and Donegal. New to the constituency are the midland counties of Longford and Westmeath
Pádraig helped his party colleagues, Senator Pearse Doherty and Martin Ferris TD, with compiling their recent comprehensive Oireachtas reports on developing the Western region.
The 35-year-old Donegal County Councillor was Sinn Féin National Campaign Director during the Lisbon Treaty referendum. He has been a board member of the cross-border business development body InterTradeIreland since 2007. During the 1990s, Pádraig served on the national executive of the Irish National Organisation of the Unemployed (INOU). He represented the INOU on the National Rural Development Forum.
Mac Lochlainn was nominated by Sinn Féin Dáil group leader and Cavan/Monaghan TD Caoimhghín Ó Caoláin.
Cllr Mac Lochlainn said:
“Despite the vastness of the constituency, travelling through it over recent months I was most struck by what the towns and villages across the constituency have in common.
“Ireland is at the periphery of Europe but the counties of this constituency have for far too long been at the periphery of Ireland. From the foundation of the state they have been ignored by government, policy-makers and job-creation agencies. As a result, they have in the past been decimated by generational emigration and still do not have infrastructure and public services on par with the rest of the state.
“For those who want an alternative to the failed politics of Fianna Fáil and Fine Gael, in the North & West constituency Sinn Féin is the only realistic option
“We can get a fairer deal for this region – in Ireland and in Europe. On issues such as the review of the Common Fisheries Policy and the Common Agriculture Policy it is vital that this region has a strong voice in Europe.
“When measures such as the Postal Services Directive which has the potential to rip the remaining post offices from rural areas are brought forward, your opposition needs to be articulated. When EU restrictions on state aid seek to stop the Government making the investment required to make the region competitive you need to know that your interests will be defended. But we also need to look at what Europe can do for us. We need to be ready to exploit all that the EU can offer this region.
“I would be proud to represent this constituency and the communities and people who encompass everything that is good about Ireland – a belief in the need to maintain strong community ties, pride in their own language, the tenacity to make a living from small farms on difficult land, the determination to establish innovative businesses with little assistance. Having resisted the greed and self-interest that characterised Celtic Tiger Ireland, values are what we need to build a better future.”

BEHIND YOU ALL THE WAY: Pádraig Mac Lochlainn with Sinn Féin reps from right across the North & West EU constituency as he hands in his nomination in Sligo