Harney's promises on cancer care 'have no credibility' 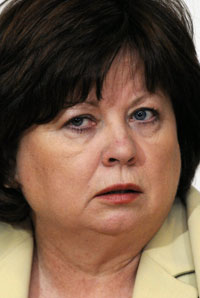 SINN FÉIN Health  Spokesperson  Caoimhghín  Ó Caoláin has described as without credibility the latest promises from Health Minister Mary Harney over reductions in waiting lists for cancer tests and treatments.
The Cavan-Monaghan Deputy said:
“In response to the latest negative reports on cancer service in this State Health Minister Mary Harney has made more promises.  She states that  waiting  lists  for  cancer  tests  and treatments will be reduced in the  months  ahead. The Minister’s promises have no credibility.
“The HIQA report on Waterford Regional Hospital shows that the plan  to  concentrate  cancer services in eight centres is fundamentally flawed.   Huge swathes of the state are ill served by this plan as four of the centres are in Dublin and not one of them is north of a line from Dublin to Galway.
“A HSE Report last week revealed that patients are waiting far too long for colonoscopy tests. It is a scandal that huge numbers of patients are waiting for periods of from three months up to two years or more for this straightforward but potentially life saving test.
“The Minister for Health Mary Harney and her Government colleagues should hang their heads in shame. They have learned nothing from the tragic death of Susie Long whose life may well have been saved had she received a vital test for cancer in time. The cuts now being imposed in our public health service can only make this situation worse.
“This is the Minister who in 2006 described the situation in A&E units as a national emergency and promised major improvements. Three years later the situation is no better. The Minister’s promises are as valueless as her policy.”
An Phoblacht
44 Parnell Sq.
Dublin 1
Ireland