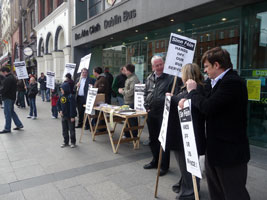 Dublin Sinn Féin held a protest outside Dublin Head Quarters in O’Connell Street on Saturday, 28 March.
The National Bus & Railworkers’ Union (NBRU) and SIPTU have voted to reject the proposals for cutbacks put forward by the Dublin Bus company. Members of SIPTU and the NBRU were said to be concerned about the implications of taking 120 buses out of the fleet, changes to work practices and job security.
Union sources suggest that the company is likely to implement its original cost saving measures from 29 March, including plans to make 160 newly-recruited drivers redundant.
An Phoblacht
44 Parnell Sq.
Dublin 1
Ireland