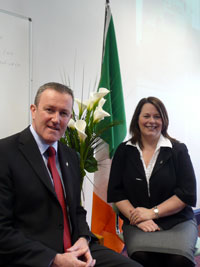 SINN FÉIN’S Assembly Team gathered at the party offices in Stormont on Tuesday to launch this year’s drive encouraging citizens to honour Ireland’s dead and wear an Easter Lily.
The event was launched by Regional Development Minister Conor Murphy MP, MLA, who said:,
“At this time of year, all around Ireland, Irish republicans gather to remember our patriot dead. We also use the Easter period to recommit ourselves to our republican objectives.
“The Easter Lily is a symbol of our struggle and our annual campaign encouraging citizens to wear it began today.
“I would encourage people to honour Ireland’s dead by wearing an Easter Lily. I would also urge them to attend local commemorations throughout the country.”

We would encourage everyone, young and old to wear the Lily at Easter as a national emblem that promotes the ideals of those patriots who died in Easter 1916 and since – Ireland united and independent with peace between Orange and Green

The Easter Lily, with its colours of green, white and orange is a symbol long associated with the Easter Rising of 1916 and one with a long and fascinating history.
The first Easter Lily badges were designed in 1925 by the republican women’s organisation, Cumann na mBan. The dual purpose of the badge was to raise money for the Republican Prisoners’ Dependents Fund and to honour the sacrifice made by the men and women of the 1916 Rising.
A year later, the Easter Lily Commemoration Committee was formed. It continued in existence until 1965. One of its founder members was Sighle Humphreys.
The original Easter Lily badge was hand-made by republicans, who sold it often at great risk throughout the country.
Traditionally, Easter Lilies were sold outside church gates on Easter Sunday and worn at republican commemorations. In the early years of their existence, people from a broad political spectrum – from Fianna Fáil to Sinn Féin, the IRA and Fianna Éireann promoted the Lily as did non-political organisations such as Conradh na Gaeilge.

stop selling
In February 1935, the Fianna Fáil leadership instructed the party to stop selling the Lily as it was “the symbol of an organisation of whose methods we disapprove”. For its Easter commemorations that same year, Fianna Fáil introduced a new symbol called the ‘Easter Torch’. This was sold for a number of years but was discontinued as the badge proved unpopular with the party grassroots, many of whom continued to wear the Easter Lily.
Since the 1930s, successive Fianna Fáil and Fine Gael governments attempted to suppress sales of the Easter Lily. Over the decades many republicans have been harassed, arrested and jailed for keeping alive the memory of the men and women of the Easter Rising through promotion of the Easter Lily.
After the 1969/70 republican split the so-called ‘Officials’ produced a new type of Easter Lily with a self-adhesive backing that lead to members of the ‘Official’ IRA and ‘Official’ Sinn Féin – later the Workers’ Party, being referred to as “Stickies”. Sinn Féin  and those organising republican commemorations continued to promote the traditional paper and pin Easter Lily.
Today, republicans continue to honour the heroic sacrifice made in 1916, when republican revolutionaries, outnumbered and ill-equipped, took on the might of the British empire and asserted in arms Ireland’s right to freedom.
Irish republicans wear the Easter Lily to honour all those who have given their lives in the cause of Irish freedom in 1916 and in every decade since.
We would encourage everyone, young and old to wear the Lily at Easter as a national emblem that promotes the ideals of those patriots who died in Easter 1916 and since – Ireland united and independent with peace between Orange and Green.

Any further details of Easter commemorations should be sent to [email protected] on or before Monday, 6 April

The deadline for Easter commemoration reports and photographs (JPEG format only) is 11am Tuesday 14 April 2009. email: [email protected]