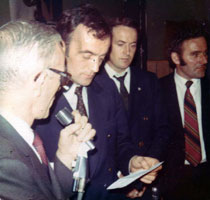 THE republican community in north Belfast, and much farther afield, were shocked to hear of the sudden death on 28 February of Billy Kelly, a republican activist of 50 years’ standing.
Billy, from the New Lodge area, can truly be called a lifelong republican. From a strongly republican family, his mother was an assistant to James Connolly, while an uncle was Connolly’s agent.
Imprisoned in Crumlin Road Jail in the 1950s for his involvement in the IRA’s border campaign, Billy was to remain an active republican for the next 50 years.

FRONTLINE FIGHTER
When nationalists in Belfast were being driven from their homes in 1969 by loyalists, the history books record that Billy was one of those Belfast IRA men who attended a meeting in North Queen Street to see what could be done. Others present included his brother John, Jimmy Steele, Joe Cahill, Billy McKee, Jimmy Drumm and Seamus Twomey. The meeting resulted in them taking over the IRA in the city, and effectively saw the formation of what was then known as the Provisional IRA.
Billy was on the frontline in the defence of nationalist areas of north Belfast such as Carrick Hill (Unity Flats) and he was one of the small number involved in the defence of St Matthew’s Church in Short Strand, seen as one of the defining moments in recent republican history.
Billy was imprisoned again, this time in Long Kesh, in the early 1970. He had been a figure in the national leadership of the Republican Movement and was a player in some of the major events of the period, including being key to the successful escape of several comrades by helicopter from Mountjoy Jail in Dublin. He was also a leading figure in north Belfast, where, as battalion O/C, he had control over one of the most active frontline areas in the North.
After getting some much-needed work on the boats, and travelling the world, the 1981 Hunger Strikes brought Billy and many others back on to the streets. In one incident at that time, his mother was shot and seriously injured by loyalists while attending a vigil in support of the prisoners on the New Lodge Road.
During that period, Billy spent weeks in Kerry, working to rally support for the Hunger Strikers and helping to organise the election campaign there for Seán McKenna, who received a tremendous vote from the people.
And over 20 years later, he was still ‘on the stump’, in his mid-60s, walking the streets of Tallaght and Finglas, helping Seán (Jack) Crowe and Dessie Ellis in the 2003 Leinster House elections.

HOLDING THE LINE
Billy has been a strong and vocal supporter of the Movement’s strategy in recent years, and I personally witnessed the sort of respect he carried when he, in typically blunt style, supported and promoted our line, on issues like the cessations and the Good Friday Agreement, at public meetings in north Belfast in the 1990s.
Billy’s history of republican activism was carried forward by some of his own children, including his daughter, Kathy, a republican former prisoner in Armagh who also served as a Sinn Féin MLA for North Belfast.
Gerry Kelly gave the oration at Billy’s funeral, and there was a poignant moment as he recalled an incident in the late 1960s when Billy and others got into hand-to-hand fighting with loyalists who had just attacked a young girl for wearing a Gaelic football club jersey.
As Gerry recalled the story, a voice from the crowd around the grave exclaimed: “That was me. That’s why I came here today.” It was the girl, now a woman, who Billy had saved all those years ago.
A fitting end for the ‘Rebel Heart’.
An Phoblacht
44 Parnell Sq.
Dublin 1
Ireland